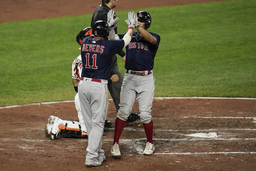 The Boston Red Sox open a three-game road series against the Washington Nationals on Friday with their playoff hopes hanging in the balance.

Boston (89-70) has dropped five of its past six games and is tied with the Seattle Mariners (89-70) for the second American League wild card, two games behind the New York Yankees (91-68) and one game ahead of the Toronto Blue Jays (88-71).

After being swept by the Yankees, the Red Sox dropped two of three games to the last-place Baltimore Orioles. Boston closes with three against the Nationals (65-94) while New York hosts the Tampa Bay Rays, Seattle hosts the Los Angeles Angels, and Toronto hosts the Orioles.

Eduardo Rodriguez (11-8, 4.93 ERA) pitches for Boston on Friday. Rodriguez has given up two earned runs or less in four of his past five starts. Last time out, on Sunday, he allowed two runs on six hits in five innings against the Yankees. Rodriguez struck out eight in a game the Red Sox eventually lost 6-3.

The 28-year-old left-hander, who will be a free agent after this season, won his only career appearance against the Nationals, when he tossed six scoreless innings in 2018.

Washington counters Friday with left-hander Josh Rogers (2-1, 2.73). He struggled Sunday in his latest start, giving up three runs on seven hits and four walks in 4 2/3 innings in a loss to the Cincinnati Reds. Given a 1-0 lead in the top of the fifth, he allowed a double and back-to-back home runs in the bottom half.

"Any time we score a run, the goal is to go out there and put up a zero for the guys to get back into the dugout," Rogers said. "And I didn't do that. ... It was a grind all day. I'm really fortunate I didn't give up more than three."

The drama for the Nationals this weekend surrounds the National League Most Valuable Player candidacy of right fielder Juan Soto.

The 22-year-old is making a strong case for the honor despite Washington's lowly place in the standings. Soto, chasing his second straight batting title, is hitting .318 (second in the NL behind Trea Turner's .325) with 29 homers and 94 RBIs.

Soto has reached base safely four times in 25 games this season. He leads the league in a number of offensive categories, including on-base percentage (.467) and walks (140).

"He's a player that's having an unbelievable year," Washington manager Dave Martinez said. "If you're saying it's the most valuable player, it's one player. And for me, Juan should have consideration of being that MVP. What he's done and what he's meant to this team, as you know, he carries this team day in and day out."

Boston's daily output has sputtered lately, with the team scoring 19 runs in the past six games. Enrique Hernandez homered on the first pitch of the game Thursday night, but the Red Sox managed just one more run in a 6-2 loss to Baltimore.

Xander Bogaerts grounded into two double plays and its 2-for-23 (.087) over the past six games.

"I ain't prepared to go home yet, so better start turning it around," Bogaerts said.