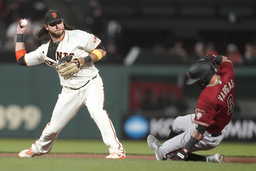 San Francisco Giants fans will get their first opportunity to see World Series hero Madison Bumgarner pitch at Oracle Park for the visiting team when the left-hander leads the Arizona Diamondbacks in the finale of a three-game series on Thursday night.

Even without their four-time All-Star and three-time World Series champion, who was allowed to walk as a free agent after the 2019 season, Giants pitchers have dominated the first two games of this series against the D-backs. Starters Logan Webb and Alex Wood combined to allow no earned runs in 11 innings.

On Wednesday, Wood and three relievers shut out the Diamonbacks 1-0, and San Francisco scored the game's only run on a Kris Bryant sacrifice fly in the seventh inning.

The Giants' two wins in this series have offset two victories by the Los Angeles Dodgers (102-56) and have allowed San Francisco (104-54) to retain a two-game edge atop the National League West with just four games remaining.

A Giants sweep of the Diamondbacks (50-108) and a Dodgers loss to the visiting San Diego Padres on Thursday night would clinch at least a tie for San Francisco's first division title since 2012.

The 32-year-old has pitched once at Oracle Park since leaving the Giants, but there were no fans in attendance in a 4-3 Arizona loss last September.

Bumgarner got a measure of revenge at his new home last month, limiting the Giants to one run in seven innings in a 3-1 Arizona win on Aug. 3.

Bumgarner is 1-1 with a 2.45 ERA in two lifetime starts against the Giants.

Although Thursday night will be a battle between a 104-game winner and a 108-game loser, both managers took time Wednesday to address the unusual significance of the series finale.

"He's done some unbelievable things here," Diamondbacks manager Torey Lovullo said of Bumgarner's record in San Francisco. "I'm a baseball fan, too. I watch these types of things all the time. They're feel-good moments. I know this town means a lot to Bum as well."

Added Giants manager Gabe Kapler, "I obviously respect Bumgarner's history here in San Francisco, and I know the fans will probably really appreciate having him back in the ballpark and on the mound. I'm sure our players are looking forward to a really good competition."

With the game meaning more than just a reunion for the Giants, Kapler noted that Buster Posey likely will get a chance to face his old batterymate for the first time.

But on this night, Posey will be catching left-hander Scott Kazmir (0-1, 4.09), who will continue to start in Johnny Cueto's spot in the rotation while the veteran works out of the bullpen.

In his first major-league outing since June 4, the 37-year-old came through with an impressive start on the road against the San Diego Padres on Sept. 22, holding them without an earned run in four innings in what turned into an 8-6 Giants win.

Kazmir has made two lifetime starts against the Diamondbacks, going 1-1 with a 3.14 ERA.