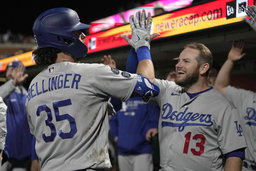 The contest in San Francisco will be the finale of a three-game series between the top two teams in the National League West.

Dodgers pitchers have allowed just two runs in the first two games of the showdown series, but the Giants made the most of them for a 2-1 triumph in the series opener on Tuesday.

Los Angeles rebounded behind Walker Buehler to win 8-0 on Wednesday, moving back within two games of the Giants in the division while taking an 8-7 lead in the season series.

Price has made three starts since being promoted to the Dodgers' rotation on July 9. Los Angeles lost all three games -- one to the Arizona Diamondbacks, two to the Colorado Rockies -- but Price didn't get decision a loss in any, allowing four runs in 12 2/3 innings.

He has faced the Giants twice this season, including a start on May 27 in which he was limited to 35 pitches. He no-hit San Francisco over 2 2/3 innings that day, striking out five, paving the way for a 4-3 Dodgers home win.

Price has never beaten the Giants in his career, going 0-2 with a 2.45 ERA in five meetings, four of which have been starts.

The second-year Dodger, acquired in the blockbuster Mookie Betts deal with the Boston Red Sox in February 2020, admitted this week that he tossed some names around with Los Angeles general manager Andrew Friedman as the trade deadline approaches.

"I'm talking to Andrew about, I guess, one guy specifically, but I'm not gonna put that out there (publicly)," he said. "But I would love to see a couple guys come here.

"(Friedman) laughs and then we just kind of talk about it. We have known each other for a very long time and have a very good relationship. There's really nothing that we can't say to one another."

The Giants hope to have star catcher Buster Posey available to face Price. Posey was pulled from Wednesday's game shortly after taking a third-inning foul ball in the mask off the bat of AJ Pollock.

"He was checked for a concussion. He has not been diagnosed with a concussion, but we're going to keep monitoring him. He was feeling better after the game, which is a good signal. I'm optimistic."

If Posey is unavailable, the good news for the Giants is that backup catcher Curt Casali has impressive numbers against Price: 7-for-16 (.438) with three homers and five RBIs.

Cueto has not seen action in any of the first 15 head-to-heads between the rivals this season. He has gone 8-9 against the Dodgers in 23 career starts, posting a 3.92 ERA.

Dodgers third baseman Justin Turner is 15-for-38 (.395) with two homers and five RBIs in his career against Cueto.