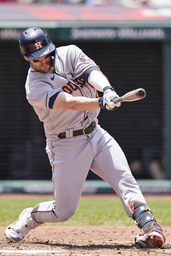 The Houston Astros followed a season-best 11-game winning streak with a surprising turn of five losses in six games to the Detroit Tigers and Baltimore Orioles, but they are streaking again.

The Astros completed a four-game road sweep against the Cleveland Indians on Sunday with a 4-3 win in 10 innings, lifting Houston to a season-best 3 1/2 game lead in the American League West with the second-place Oakland Athletics set to visit for three games starting Tuesday.

"It was cool to do it with half our lineup out," said Astros outfielder Chas McCormick, who drove in three runs in the finale against the Indians. "It was sweet to win all four games (on the road).

The Astros were without All-Star left fielder Michael Brantley (right side soreness), right fielder Kyle Tucker (back spasms), designated hitter Yordan Alvarez (paternity leave) and catcher Martin Maldonado (bereavement leave) for varying stretches in Cleveland yet were undeterred. Now they host the Athletics, a club they have beaten seven times in 10 games this season with a plus-32 run differential in the series, hopeful that all four regulars will return to action Tuesday.

Left-hander Framber Valdez (5-1, 2.18 ERA) has the starting assignment for the Astros. Valdez rebounded from his first loss of the season by allowing two runs on four hits and five walks with six strikeouts over seven innings July 1 in a 7-2 win against the Indians.

He has not surrendered more than three earned runs in any of his seven starts and, excluding his season debut following an extensive stay on the injured list, has worked at least six innings in every outing. Opposing batters are slugging just .295 against Valdez over his past six starts.

Valdez is 0-1 with a 2.25 ERA over three career appearances (one start) against the Athletics.

Right-hander Chris Bassitt (9-2, 3.04 ERA) will start the series opener for Oakland Tuesday. He is 9-0 with a 2.74 ERA and a .202 opponent batting average over his past 15 starts, the longest winning streak in the majors this season.

Entering Monday's games, Bassitt led the AL in innings (106 2/3), was tied for second in wins and ranked third in winning percentage (.818). He earned the victory in his last start against the Texas Rangers on June 30, allowing three hits and one walk with seven strikeouts over seven shutout innings.

Bassitt is 3-3 with a 3.67 ERA over 10 career appearances (nine starts) against Houston, including an 8-1 loss on opening day when he allowed three runs on four hits and two walks with three strikeouts over 5 1/3 innings.

The Athletics led the AL West by 2 1/2 games on June 16, and Oakland was in first place for 61 days before the Astros caught fire and claimed the top spot in the division.

Since a June 18 win in New York against the Yankees, the Athletics have dropped 10 of 15 games to help facilitate the change atop the division standings. With the All-Star break fast approaching, the series in Houston provides Oakland a shot to close ground.

Following this three-game set, just two series will remain between the AL West rivals, with both coming during the season's final two weeks.

"It's a big series for us," Oakland manager Bob Melvin said. "We've been in first place for a lot of the year but they've been in first here recently. It's a good opportunity for us to catch back up."