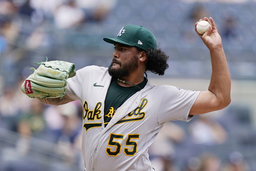 The Oakland Athletics will seek to continue their dominance over their geographic rival when they cross the Bay Bridge to visit the San Francisco Giants for the opener of a three-game series on Friday night.

A pair of pitchers who have fared well in the rivalry are scheduled to get the ball when A's left-hander Sean Manaea (6-3, 3.01 ERA) and Giants righty Johnny Cueto (5-3, 4.05) duel in a matchup of the second-place team in the American League West against the National League West leader.

The Giants enter this week's set riding a three-game winning streak and having won eight of their past nine. However, the club returned home to an off day Thursday in hopes of avoiding a significant loss.

Veteran first baseman Brandon Belt, who ranks third on the Giants in home runs (11) and RBIs (28), injured his right knee while attempting to score Wednesday in the team's 9-3, 13-inning win over the Los Angeles Angels in Anaheim, Calif.

Belt had to be helped off the field and was scheduled for further examination Thursday. The club is expected to update his status before the series opener.

Regardless of the diagnosis, it's possible Belt wouldn't start against Manaea anyway. Belt has gone just 2-for-11 in his career in the lefty-on-lefty matchup.

Right-handed-hitting Wilmer Flores, who has gone 2-for-5 against Manaea, would be the likely replacement despite the fact the utility infielder has started more games at second base (16) and third base (15) than at first base (11) this season.

"Nobody works harder at his defensive game than Wilmer," Giants manager Gabe Kapler said. "He always puts his body in good athletic positions. We trust him."

Manaea is having an impressive June, owning a 3-1 record and a 1.04 ERA over four starts. He had a three-game winning streak end in a 2-1 road loss to the New York Yankees on Sunday, a game in which he recorded a season-high 11 strikeouts while allowing two runs in 5 1/3 innings.

A's manager Bob Melvin felt compelled to pull outfielder Mark Canha from the game in the third inning because of a painful left hip. An MRI was scheduled for Friday.

"For him to come out of a game means he's hurt," Melvin said afterward.

Technically, the Athletics' 10-game road trip continues with the series at San Francisco, where Oakland went 3-0 last season and haven't lost a series since 2015. The A's have won nine of their past 12 games in San Francisco.

One pitcher the A's have never solved is Cueto, who has gone 1-0 with a 2.57 ERA in three career starts against Oakland.

The veteran snapped a two-game losing streak in a 5-3 home win over Philadelphia on June 18, allowing three runs in six innings.

Despite his overall success, Cueto has struggled against A's first baseman Matt Olson, who has homered twice in six career at-bats vs. the Giants veteran.

Olson went 2-for-3 on Thursday, giving him 10 hits, including two doubles and two homers, in the first seven games of Oakland's trip.

The clubs will complete a six-game season series with three matchups in Oakland in August.