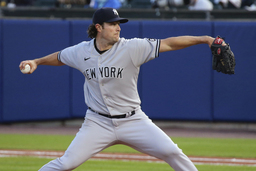 On Monday, enforcement begins for MLB rules regarding the usage of foreign substances among pitchers.

Gerrit Cole said he is ready to be within the rules when he takes the mound Tuesday as the Yankees play host to the Kansas City Royals in the first game where umpires can inspect pitchers.

"I don't have a lot of expectations to be honest," Cole said Sunday. "I think I'm in the same boat as everyone else just waiting for this to play out. We know the ramifications on the roster and whatnot moving forward from that (if a pitcher is disciplined). We'll be prepared to adjust and be within the rules."

The new enforcement bans anything other than rosin being added to the ball to help with a pitcher's grip. The rules regarding foreign substances were already on the books but rarely enforced until now. At issue has been increased spin rates for pitchers and a decrease in offense.

Cole, who has been accused of using foreign substances, is among those who could face more scrutiny and last week pleaded with Major League Baseball to "please talk to us." He is on the union's executive committee.

Until a full solution is reached, any pitcher caught using a foreign substance will face a 10-game suspension.

Cole (8-3, 2.31 ERA) enters after matching his longest start of the season. On Wednesday in a 3-2 win over the Toronto Blue Jays in Buffalo, he pitched eight innings for the second time while allowing two runs on four hits. He also matched a season low with four strikeouts and got 12 ground ball outs while throwing 20 changeups.

The Yankees won two of three game from the Oakland Athletics over the weekend and are 7-4 in their past 11 games since getting swept at home by the Boston Red Sox from June 4-6. New York earned a 2-1 win Sunday when Gary Sanchez hit a two-run double in the sixth inning and third baseman Gio Urshela started a game-ending triple play.

Kansas City is 3-12 in its past 15 games since June 4 but took two of three at home from the Boston Red Sox this past weekend, ending the series with a 7-3 win on Sunday. It was the Royals' most runs since a 14-5 win over the Minnesota Twins June 4.

The Royals also tied a season high with 15 hits as six players produced multi-hit games. Jarrod Dyson hit a tiebreaking two-run double in the third while Whit Merrifield added a two-run homer as the Royals went 4-for-16 with runners in scoring position after hitting .147 (15-for-102) in that situation over the previous 14 games.

"A good series against a good team," Royals manager Mike Matheny said. "We saw a lot of different components come together with the great start, the timely hits. Just so many things happened today. Everybody contributed. Good defense. One of those games where you saw a lot of the different pieces that we were hoping to see."

Singer last pitched Wednesday when he allowed one run and four hits in three innings before the right-hander was removed with tightness in his pitching shoulder. He threw 51 pitches Wednesday. Matheny said Sunday that Singer will make the start in the series opener against the Yankees.