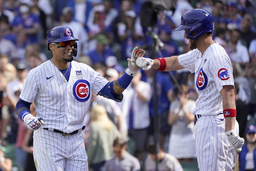 The Chicago Cubs and host San Francisco Giants will meet as division leaders when two of the National League's top pitching staffs duel in a four-game series that kicks off Thursday night.

The series will match a Giants team that used six wins in its past eight games, including three of four over the Los Angeles Dodgers, to move atop the National League West against a Cubs team that has won nine of 10, including three straight over one of San Francisco's chief West rivals, the San Diego Padres.

The Giants are more familiar with Davies and the Cubs with DeSclafani than one might normally expect of interdivisional rivals, being that Davies spent last season with the Padres and DeSclafani spent five previous seasons with one of Chicago's Central rivals, the Cincinnati Reds.

Davies started twice against the Giants last year and limited them to three runs in eight innings. He didn't walk a batter in either outing.

The 28-year-old has made six career starts against San Francisco, going just 1-2 despite a fine 2.10 ERA.

This time, he'll see a Giants team that's been led of late by newcomers Wilmer Flores and LaMonte Wade Jr. They have combined to go 10-for-22 with a double, a home run and four RBIs in the Giants' past five games.

One Giant Davies probably won't see is outfielder Mike Yastrzemski, who jammed his right thumb into the outfield fence in Tuesday's loss to the Los Angeles Angels and had to come out of the game. X-rays were negative, but the Giants don't know how long the thumb will take to heal.

"One thing we've seen with Mike for a long time is he's going to sacrifice his body for our team," Giants manager Gabe Kapler said. "I thought he played it perfectly and I respect the way he plays the game."

If Yastrzemski is able to come off the bench as a pinch hitter, Davies hopes he's around long enough to face him. He acknowledged this week he's not exactly thrilled with early hooks this season, preventing him from getting any outs in the sixth inning in eight of his 11 starts.

"We're trying to win ballgames," Davies said diplomatically when asked about Cubs manager David Ross' use of the bullpen. "That's not my decision to make; that's not any starting pitcher's decision to make. When Rossie wants to make the move, that's his decision."

DeSclafani has made 12 starts against the Cubs, going 4-3 with a 3.91 ERA. He has served up 13 home runs in those 12 games, including two each to Anthony Rizzo and Kris Bryant.

The 31-year-old has struggled against one other current member of the Cubs, Joc Pederson, who spent the first seven years of his career with the Dodgers. Pederson has crushed DeSclafani to the tune of a .455 average with three homers in 11 at-bats.

The hottest of the Cubs on the eve of the series opener have been Javier Baez and Patrick Wisdom, who combined for nine hits, including six homers, and nine RBIs in 23 at-bats in Chicago's three-game sweep of the Padres that concluded with Wednesday's 6-1 win.