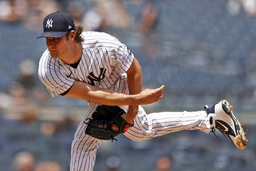 Coming off a lost weekend in Detroit, the New York Yankees promptly sputtered through yet another loss against the Tampa Bay Rays.

New York then rebounded with a pair of close victories and is in position to clinch a series over the Rays Thursday afternoon when the American League East foes conclude their four-game set at Yankee Stadium.

Ace Gerrit Cole (6-2, 1.78 ERA) will be on the mound as the Yankees attempt to clinch a second straight series against the Rays after taking two of three from them May 11-13 in Tampa Bay. That series win came after the Yankees dropped five of the first six meetings, including an ugly sweep in New York April 18-20.

New York is in position to win this series after the events of the previous two nights. On Tuesday, the Yankees posted a 5-3 win when Clint Frazier hit a game-ending two-run homer in the 11th, and a night later they followed it up by holding on for a 4-3 win.

Gio Urshela, who entered Wednesday in a 1-for-19 skid, hit a two-run homer four batters in, and Frazier contributed a two-run single.

The Yankees have won the past two games despite showing plenty of inconsistent moments offensively by going 4-for-20 with runners in scoring position in their past two wins and made two more outs on the bases Wednesday.

"You're going to face adversity in the course of a season," Yankees manager Aaron Boone said. "You gotta be able to deal with it. You gotta be able to answer it, and we're still not playing anywhere near our best baseball obviously -- too many mistakes tonight that fortunately we were able to overcome.

"I do like the way the guys are competing right now and they're doing enough to obviously hold on and win tonight and back-to-back wins against a really good team. Hopefully tomorrow we can finish off a really good start to this homestand."

Tampa Bay is looking to avoid its first three-game losing streak since April 29-May 1.

The Rays are 2-for-21 with runners in scoring position and have 22 strikeouts in the past two games.

Randy Arozarena struck out four times Wednesday and is in a 3-for-28 slide over his past eight games while Yandy Diaz is in 2-for-29 slump.

Despite the rough showings in the previous two games, the Rays are 16-3 in their past 19 games heading into their third encounter with Cole this season.

"We're playing really good baseball," Tampa Bay manager Kevin Cash said. "If we're going to dwell on the last two games, we should dwell on the last 20 and we've done some really special things. The Yankees have pitched really, really well and made big pitches when it meant the most (in) the last two ballgames."

Cole last started Friday in Detroit when he allowed one run on six hits in six innings of a no-decision. The Yankees wound up with a 3-2, 10-inning loss and fell to 6-5 in his starts this season.

Cole is 1-4 with a 3.36 ERA in nine career starts against Tampa Bay. His lone win over the Rays occurred May 12 in Tampa Bay when Cole allowed four hits and fanned 12 in eight innings of a 1-0 win.

Ryan Yarbrough (2-3, 4.26) is expected to make his fourth start since pitching 3 1/3 scoreless innings against the Yankees May 12. Yarbrough has a 4.41 ERA in those starts and last pitched Saturday against the Philadelphia Phillies, when he allowed two runs on three hits in 4 1/3 innings.

The left-hander is 4-2 with a 2.54 ERA in eight career appearances against New York.