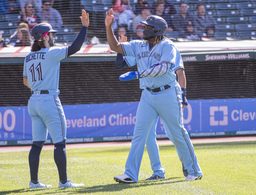 The Toronto Blue Jays will have their second home opener of the season Tuesday night when they start a two-game set against the Miami Marlins in Buffalo, N.Y.

After playing their first 21 home games this season at their spring-training stadium in Dunedin, Fla., the Blue Jays are returning to Sahlen Field, where they played home games in 2020 due to COVID-19 restrictions in Canada.

The difference this season is that there will be fans in attendance at the home park of the Blue Jays' Triple-A affiliate, the Buffalo Bisons. The Bisons are playing their home games in Trenton, N.J.

The Blue Jays were 10-11 in their home games in Florida.

Ray faced the Marlins once in 2020, allowing four hits and one earned run in 3 1/3 innings on Sept. 1. He is 2-3 with a 2.31 ERA in seven career appearances (six starts) against Miami. Alcantara has never faced the Blue Jays.

Both teams had Monday off. The Marlins had their game against the Red Sox in Boston on Sunday postponed due to rain while the Blue Jays split a doubleheader with the host Cleveland Indians.

The Blue Jays came close to sweeping the doubleheader and the three-game series from the Indians.

Left-hander Steven Matz was cruising and the Blue Jays were leading 4-0 going into the bottom of the sixth inning of the second game on Sunday. But an error led to a four-run inning that tied the game.

The Blue Jays regained the lead on Marcus Semien's RBI single in the top of the seventh of the seven-inning game. But in the bottom of the seventh, reliever Tyler Chatwood walked four straight batters with one out to tie the game before being replaced by Anthony Castro, who allowed a sacrifice fly and Cleveland won 6-5.

Montoyo has been criticized for his handling of the inning,

"For us to be good, Chatwood needs to do the job," Montoyo said. "He needs to be the reliever that he has been. So you've got to give him the chance to regroup and do the job, get a double-play ball or something. He just couldn't do it. ... He was our best reliever for the first two months, and he just needs to get it back."

The Marlins have lost three in a row and four of their past five games after winning three straight.

Miami has dealt with injuries. Center fielder Starling Marte (non-displaced rib fracture) was reinstated from the injured list on Friday after missing 34 games. That injury did create an opportunity for Magneuris Sierra, who batted .283 in May with two doubles and two steals in 25 games (15 starts).

"It's nice to get him out there," Marlins manager Don Mattingly said.

"I have more playing time," Sierra said, "a lot more at-bats, a lot more situations where I can play and keep improving and working on my game."