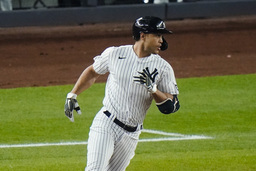 While fans at Yankee Stadium directed plenty of profane chants at the Houston Astros on Tuesday, they also produced plenty of cheers for the home team.

The New York Yankees will look to give their fans even more to cheer about Wednesday night when they host the Astros in the second game of the emotionally charged three-game set.

Because of the COVID-19 pandemic that limited last season to 60 games, all inside the teams' divisions, this is the first series between the clubs since Houston beat New York in six games in the 2019 American League Championship Series.

Shortly after the Astros lost in seven games to the Washington Nationals in the 2019 World Series, the details of their sign-stealing scandal were revealed. The revelations included that the Astros banged on trash cans during the 2017 season, which saw the Astros beat the Yankees in a seven-game ALCS.

The Yankees opened this season's series with a 7-3 victory Tuesday, continuing their recent surge by winning their fourth game in a row and prevailing for the ninth time in 12 games.

"It felt like a playoff atmosphere," Yankees manager Aaron Boone said. "The energy that was created -- we haven't seen that since 2019."

Houston manager Dusty Baker said, "At least there wasn't any violence. (The fans) can say whatever they want. It sounded like a packed house tonight even though it wasn't. We kind of expected that reception."

New York's Giancarlo Stanton, who has a 10-game hitting streak, hit a two-run homer and drove in three runs. DJ LeMahieu delivered the tiebreaking infield single in the sixth inning, and the Yankees scored two more runs on the play on a throwing error by third baseman Alex Bregman.

"The fans led the charge," Stanton said. "That was intense. I wouldn't want to be on the other side of that. They brought something heavy."

The sellout crowd of 10,850 was constantly directing profane chants at the Astros, notably Jose Altuve, Bregman and Carlos Correa.

Houston, which got homers from Bregman and Michael Brantley, will aim to even the series Wednesday.

Altuve went 0-for-4 and is in a 1-for-25 skid that has dropped his average to .247. Correa was 0-for-4, leaving him hitless in his past 11 at-bats. Houston pitchers issued nine walks while striking out eight Tuesday.

The Astros are 8-4 in their past 12 games following a stretch in which they lost nine of 10.

New York's Jordan Montgomery (1-1, 4.39 ERA), who has not allowed more than six hits in a start this season, gets the ball Wednesday. He last pitched in Thursday in New York's 4-3, 10-inning loss at Baltimore, where he allowed two runs and six hits in five-plus innings.

Montgomery, a left-hander, is 0-1 with 5.11 ERA in three career starts against Houston, which was the last opponent he faced before undergoing Tommy John surgery in May 2018.

Houston's Luis Garcia (0-3, 2.70 ERA) will make his fourth start of the season and second in place of Jake Odorizzi, who is recovering from a forearm injury. Garcia last pitched in a 1-0 loss to the Seattle Mariners on Thursday, when he allowed one run on three hits in five innings.

Garcia will face the Yankees for the first time and also is seeking his first career win. He is 0-4 with a 2.78 ERA in 10 regular-season appearances (four starts). Including his postseason outings, Garcia has limited hitters to a .175 average.