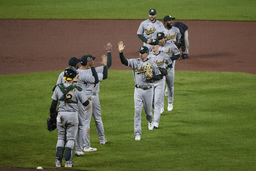 The Oakland A's will try for their 14th straight win and wrap up a series sweep of the host Baltimore Orioles when the teams meet for a Sunday matinee.

Oakland actually lost the first six games of its season but quickly took off after that. The A's have lost just once in their longest winning streak since 2002 -- when they took 20 in a row.

The A's are coming off of a 7-2 victory on Saturday night. They scored a run in the first and three more in the second, chasing Orioles starter Wade LeBlanc, and never looked back.

Jed Lowrie had the game's big hit, a three-run homer in the fourth inning that gave Oakland a 7-1 lead.

After the game, Oakland manager Bob Melvin said he and his team aren't worrying about how long the streak goes. All they want is wins.

"We're just playing each day with momentum and trying to win," Melvin said. "That's what this team has been good at for a long time. [We are] just trying to win the day."

Chris Bassitt gave up two runs and struck out eight in six innings to come away with the win Saturday. Oakland's starters have given up two runs or fewer in 11 of the 13 wins. Their record is 8-0 along with a 2.78 ERA.

That's a big reason the A's turned things around so quickly after that 0-6 start. Jesus Luzardo (1-1, 5.89) starts for the A's on Sunday. This will be the first time he's ever gone against the Orioles.

Baltimore will send out top its starter John Means, who has been one of baseball's best pitchers this season. The left-hander, an All-Star and the runner-up in Rookie of the Year voting in 2019, is 1-0 with a 1.52 ERA this season with solid performances in all four games.

Manager Brandon Hyde moved Means back a day to give him some extra rest as the Orioles try to be careful with him at times. Means has faced the A's just once, giving up one run in three innings in a start in 2019, but he was pinned with the loss when the Orioles were hammered 13-2.

Trey Mancini and Chance Sisco each drove in a run for the Orioles in Saturday's loss. Offense has been a problem throughout the early season, and the Orioles might have been in big trouble if the pitching staff hadn't been consistent.

After Saturday's loss, the Orioles had a .222 team batting average. Sisco, the back-up catcher, finished the day 2-for-4 and said the mood was fine in the locker room, that the players are confident the offense is going to improve.

"Obviously, everyone would like [the balls] to fall [more]," Sisco said. "The hits will come; they'll come."

Several reports late Saturday indicated that the Orioles will designate LeBlanc for assignment and bring up pitching prospect Zac Lowther. The left-hander is the team's 11th-ranked prospect on mlb.com and 19th per Baseball America.