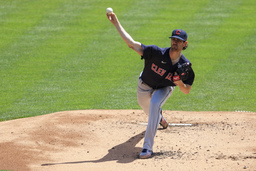 The New York Yankees have flexed their offensive muscle in the first two contests of their four-game series against the host Cleveland Indians.

While the offense has made its presence felt, all eyes likely will be on the mound Saturday when the Yankees send ace Gerrit Cole (2-1, 1.82 ERA) against reigning American League Cy Young Award recipient Shane Bieber (2-1, 2.45).

The two All-Star right-handers will renew acquaintances for first time since Sept. 29, with Cole and New York getting the better of that exchange. Cole struck out 13 batters and the Yankees tattooed Bieber for seven runs on nine hits -- including two homers -- in 4 2/3 innings of a 12-3 win in Game 1 of the AL wild-card series.

"I wouldn't mind it unfolding like that again," New York manager Aaron Boone said. "We see Gerrit all the time and know how special he is. Bieber is similar. I know there's going to be two studs on the bump that day, for sure."

Let's start with Cole, who struck out 10 batters in the Yankees' 4-2 setback to the Tampa Bay Rays on Sunday. The 30-year-old has fanned a franchise-best 39 batters through the first four starts of the season, and struck out at least seven hitters in each of his past 13 regular-season starts.

"When you look at stuff like that, you're doing your job," Cole said. "But in the end, after it's been done, you've got to prepare for the next game. I've certainly been making a lot of good pitches, and that's what leads to that."

Cole has a 2-1 record with a 2.79 ERA in four career starts against Cleveland.

As for Bieber, he notched double-digit strikeouts for the fourth time in as many starts on Sunday. He fanned 13 and allowed three runs on six hits over eight innings in a 6-3 win at the Cincinnati Reds.

Bieber, 25, owns a 1-0 record with an 8.31 ERA in two career regular-season encounters versus the Yankees.

As for that performance in the wild-card series?

"It didn't end the way that we wanted it to, or that I wanted it to, personally," Bieber said. "I'm definitely excited for (Saturday)."

Giancarlo Stanton (0-for-3), Aaron Hicks (0-for-3, three strikeouts) and Rougned Odor (0-for-2) have yet to record a hit against Bieber, however all three Yankees showed their power on Friday. Stanton belted a pair of homers and Hicks and Odor also went deep in New York's 5-3 win over Cleveland.

Indians slugger Franmil Reyes had an RBI double in the first inning on Friday. He has hit safely in each home game this season for Cleveland.

The Indians, however, squandered a 3-0 first-inning lead for the second time in as many nights, much to the chagrin of manager Terry Francona.

"We just couldn't get a knockout punch early," Francona said after his team lost its third in a row and fifth in six outings.