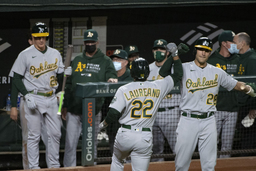 Still, they have come a long way from a historically bad start.

After losing 5-1 to the Dodgers on April 6, Oakland was 0-6 for the first time since 1916 when the franchise played its games at Shibe Park in Philadelphia.

"It's six games into a six-month season," Chris Bassitt, who will start Saturday's game against the Orioles in Baltimore, said then.

Bassitt (1-2, 4.43 ERA) will make his fifth start of the season in the second game of the three-game series against the Orioles.

Bassitt, like his team, turned things around after he started 0-2 with a 5.56 ERA and a .289 opponents average.

In his most recent start, Bassitt took a no-decision in Oakland's 3-2 win over Detroit last Sunday. He went six innings, allowing two runs off five hits with eight strikeouts.

Bassitt was able to get out of an early jam as Detroit loaded the bases with one out in the first but a popup and strikeout ended the threat.

"I was trying to pitch a little bit too much in the first," Bassitt said. "Hit spots instead of going right at them."

He has not faced Baltimore since June 19, 2019, when he went 5 2/3 innings and allowed two runs on two hits with six strikeouts.

After beating Baltimore 3-1 on Friday night, the A's have outscored their opposition during the streak 74-34.

The Orioles have not announced a starter for Saturday, with manager Brandon Hyde saying it could be a bullpen game or someone could get called up from the alternate site in Bowie, Md.

It was John Means' turn in the rotation but Hyde said they would push him back until the series finale on Sunday.

"Just going to give John an extra day," Hyde said.

In his postgame remarks on Friday, Hyde spoke of his team's lack of runs as Baltimore left 10 runners stranded. The Orioles cannot do that Saturday if they want to end this long Oakland winning streak.

"We had opportunities in the first inning, later in the game," Hyde said. "We just didn't get the big hit ... we have to move the ball with runners in scoring position. We're punching out too often. ... I thought they did a nice job of pitching to us when it mattered. But we're swinging at pitches too often in big spots. We have to make better decisions at the plate."