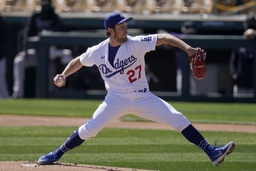 The Dodgers are the reigning World Series champions -- of a pandemic-shortened season.

Now they would like to be recognized as something else: one of the greatest teams ever. And they are off to a great start in quest of that distinction.

The Dodgers scored a second straight win over the National League West-challenging Padres in San Diego on Saturday night for an eighth straight win that ran their record to a franchise record-equaling 13-2 start.

Both were first-round picks in the 2011 draft. The 30-year-old Bauer was the third player taken. The 28-year-old Snell was the 52nd.

Bauer joined the Dodgers in the offseason after winning the National League Cy Young Award with Cincinnati last year. He led the league in 2020 in earned run average (1.73) and WHIP (0.795), although posting only a 5-4 record in 11 starts. He had 100 strikeouts in 73 innings, and two of his starts were complete-game shutouts.

A Los Angeles native and a product of UCLA, Bauer's goal is to help make the Dodgers the greatest team in baseball.

"I'm glad to be part of a great team in a great city," Bauer said earlier this spring. "We want to be champions."

Bauer is 2-0 in his first three starts with the Dodgers with a 2.70 ERA. He has allowed six runs on seven hits and five walks with 29 strikeouts in 20 innings. He has served up three homers.

Snell's first season in San Diego is not off to the same start. He has a 4.35 ERA in three starts after giving up three runs on three hits and two walks last Tuesday in Pittsburgh in the second-shortest outing of his career. He lasted just 2/3 of an inning and threw 38 pitches.

"I think the hardest part of this week for Blake has been waiting for Sunday," Padres manager Jayce Tingler said. "He's been champing at the bit to get back out there. The roughest thing for a starting pitcher after one like that is waiting four days for the next opportunity."

Snell faced the Dodgers twice in last year's World Series while with Tampa Bay. He allowed three runs on four hits and four walks with 18 strikeouts across 10 innings. But he didn't get a decision in either game. In Game 6 of the World Series, Snell was pulled with one out in the fifth and the Rays holding a 1-0 lead. The Dodgers went on to win the game and the World Series.

Snell has faced Los Angeles once in the regular season, in which he pitched two perfect innings with four strikeouts to open a game for Tampa Bay in 2019.

Tingler responded late Saturday to two tough losses to the Dodgers in the first two of 19 meetings between the Padres and Dodgers this season.

"These things are going to make us better," Tingler said. "We're not a finished product."