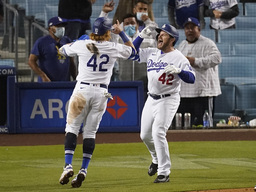 The Los Angeles Dodgers are the best team in baseball.

The San Diego Padres aspire to be that.

And many experts believe the Southern California rivals eventually will meet later this year in the National League playoffs.

But first things first. The two teams separated by 120 miles and decades of tradition will meet for the first of 19 times this regular season Friday night in San Diego.

As for that rivalry, the Dodgers don't believe there is one, at least not yet. After all, the Dodgers are the reigning World Series champions and swept the Padres in a three-game playoff series en route to the title.

But since the end of last season, the Padres added top-of-rotation starters Yu Darvish and Blake Snell. The Dodgers countered by acquiring Trevor Bauer. The Padres believe the war is on for the National League West. The Dodgers, again, have said this isn't a rivalry.

However, earlier this week, the Dodgers adjusted their rotation so that their top three starting pitchers -- right-hander Walker Buehler, left-handed ace Clayton Kershaw and the right-handed Bauer will face the Padres this weekend.

The Padres will counter with the left-handed Ryan Weathers, right-hander Darvish and left-hander Snell in the three game series.

Although the season is only two weeks old, there are, at least, some bragging rights at stake between the teams with two of the highest player payrolls in the National League.

"I think it's good for the game of baseball," said Justin Turner of the Padres' growth when he re-signed with the Dodgers this spring. "They're going out and being aggressive and going for it ... It's good to see teams doing that. I think the way I look at it is we're gonna have 19 World Series games this year."

"They know us, we know them," countered Padres manager Jayce Tingler after the Padres completed a 5-2 road trip with an 8-3 win in Pittsburgh Thursday afternoon. While the Padres were returning home on a cross-country flight, the Dodgers were heading south from Los Angeles after coming from behind twice to defeat Colorado 7-5 behind three-run homers by Turner and Max Muncy.

The Padres will be boosted Friday by the expected return of shortstop Fernando Tatis Jr. from the 10-day injured list (partial left shoulder dislocation), and right fielder Wil Myers, who has missed the past two games with patellar tendinitis.

The 21-year-old Weathers will be making his first major-league start. He is 1-0 with a save in three relief appearances with a 1.50 ERA. Weathers last year became the second pitcher ever to make his big-league debut in the playoffs, working 1 1/3 scoreless innings of relief against the Dodgers. Weathers was the Padres' first-round pick in the 2018 draft (seventh overall).