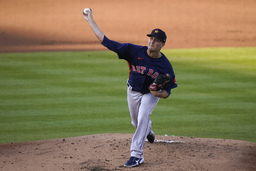 Jake Odorizzi joined the Houston Astros during spring training, and the 31-year-old right-hander will make his regular-season debut when he starts against the Detroit Tigers on Tuesday.

Odorizzi (0-1, 6.59 ERA in 2020) signed a two-year contract as a free agent with Houston in early March, including a player option for a third year.

As the regular season got going, Odorizzi built up his arm strength by making two starts at the team's alternate training site. On Thursday, Odorizzi tossed 90 pitches against Texas' training site squad and came out of it ready to join Houston's rotation.

"That's exactly what we were looking to do. I came through it feeling well," he said. "I'll be ready to go. It's been a weird time for me, in general, just showing up late and going to a different site than the rest of the players. ... Just a lot of excitement going on and I'm sure there will be a lot (more)."

Odorizzi spent the past three seasons with the Minnesota Twins. He had a career year in 2019, posting a 15-7 record and 3.51 ERA over 30 starts. He was limited to four starts last season due to blister issues, a ribcage strain and a chest contusion after getting struck by a line drive.

The Astros were in need of another veteran arm with Justin Verlander still recovering from Tommy John surgery and Framber Valdez working his way back from a fractured finger.

Odorizzi is looking for a bounce-back season with his new club.

Odorizzi has consistently pitched well against the Tigers during his career. In 12 starts, he's gone 6-1 with a 3.09 ERA.

He'll be opposed by Tigers ace Matthew Boyd (1-1, 2.13), who has been sharp in his first two outings this season. He tossed 5 2/3 scoreless innings against Cleveland on Opening Day, then was a hard-luck loser against Minnesota on Thursday. He gave up three runs in seven innings but didn't walk a batter while recording eight strikeouts. Boyd threw strikes on 77 of 96 pitches.

Detroit snapped a four-game losing streak while winning the first game of the series on Monday, 6-2. Houston has lost its past three games.

The Tigers hit three homers in manager A.J. Hinch's return to Houston. He was fired by the Astros after a highly successful five-year stint because of the team's sign-stealing scandal.

"Emotional night for me personally," he said. "I think our guys knew that and responded with a great effort and across the board played well. It was a fun game, fun win."

Renato Nunez, who made the club as a spring training invitee, hit a homer and a double in his second game as a Tiger. Nunez hit 31 homers for Baltimore in 2019. He was elevated from the taxi squad after Miguel Cabrera was placed on the 10-day injured list due to a triceps injury.

"That's exactly why we wanted to keep him," Hinch said. "When the opportunity came up, we raced to put him on the roster because he can impact a game."