Zack Greinke tries to get Astros back on track vs. Tigers 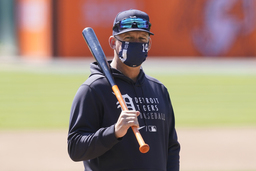 The Houston Astros cooled off over the weekend, then got a rare Sunday off. They'll look for their bats to heat up again Monday when they start a three-game series hosting the Detroit Tigers.

Houston swept four games in Oakland to start the season and went on to win six of its first seven games before the A's struck back by winning the last two games of a three-game set in Houston.

"This is the life of baseball," Astros manager Dusty Baker said. "One week you're hot, the next week you're not. You don't know why, exactly. When you play teams back-to-back (weekends), they make adjustments to you."

The A's hit three homers while recording a 6-2 victory on Friday and two more in a 7-3 triumph on Saturday.

Having right-hander Zack Greinke start the opener of the Tigers series increases the chances of a quick turnaround. Greinke has been stellar in his first two outings this season, blanking Oakland over six innings and limiting the Los Angeles Angels to two runs in seven innings. He's issued only one walk while striking out eight.

Third baseman Alex Bregman didn't play on Saturday for the Astros after going 1-for-12 in the previous three games. Bregman, who had four consecutive two-hit games to start the season, dealt with a nagging hamstring issue during spring training and Baker said he wanted to give him a two-day break.

"We've got to take care of him," Baker said. "He's been playing a lot and I just decided it would be best to give him (time) off because his legs are a little sore."

Casey Mize will start for Detroit. The No. 1 overall pick of the 2018 draft, Mize turns 24 on May 1. The right-hander started seven games last season, but is still looking for his first major-league victory.

In his first start this season, Mize gave up one run on five hits in four innings against Minnesota while throwing 82 pitches. He's never faced the Astros.

Detroit won't have Miguel Cabrera this week, as he turns 38 next Sunday while on the 10-day injured list. He is ailing with a strained left biceps, an injury that has nagged him at times in his 20-year career.

"I told him last night after the game I don't want him to keep fighting it," manager AJ Hinch said. "Let's get it get checked out, put him on the injured list and make sure we nip this pretty early."

Hinch will be making his return to Houston, with whom he won a World Series in 2017. He lost his job in the aftermath of the Astros' sign-stealing scandal following the 2019 AL pennant-winning season, and he was suspended last season.

Hinch didn't want to comment on his return after his team was swept in a three-game series in Cleveland over the weekend, saying he's more concerned with getting his current team untracked.

"We have to continue to challenge ourselves and hold ourselves accountable to a high level, to play winning-style baseball," he said. "If you look at anything this weekend, we have plenty to work on. I stay away from the silver-lining type stuff."