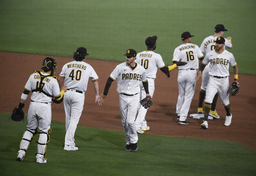 The San Diego Padres will tie a franchise record Sunday afternoon if they complete a season-opening four-game sweep of the visiting Arizona Diamondbacks.

Only once before in 53 seasons have the Padres opened the season 4-0. That came in 1984 -- a season that them win the first of their two National League championships.

Right-hander Chris Paddack will start for the Padres on Easter Sunday against Diamondbacks' right-hander Taylor Widener.

The wild ride continued this spring. Paddack was very sharp in his first two outings and really struggled in his final two starts -- finishing with a 10.64 ERA.

While Paddack is in the middle of the Padres rotation at the moment, Dinelson Lamet -- who had a 2.09 ERA last season -- might be ready to pitch by May after rehabbing an elbow issue. And Ryan Weathers, a starter currently working out of the bullpen, allowed one hit to Arizona on Saturday night over three scoreless innings of relief.

"I didn't think Chris had quite the finish or the aggressiveness," Padres manager Jayce Tingler said of Paddack's final two exhibition outings.

"I thought the fastball and changeup: I thought the hitters were getting a little bit better peak at it. I want to see him get athletic and aggressive Sunday and finish pitches. Bring the fight to them. Whatever is going to happen, make it happen early. Don't be dancing around the zone. Get after it. Use the bottom of the zone. Use the top. Use the corners. Be an athlete and get after it.

Widener edged out Taylor Clarke to win a spot in the Arizona rotation at the end of spring training. The 6-foot, 26-year-old Widener made his major league debut against the Padres last July 25. He was 0-1 with a 4.50 ERA in 20 innings over 12 relief appearances with the Diamondbacks in 2020. He allowed 14 hits and 12 walks with 22 strikeouts.

The hard-throwing Widener faced the Padres three times, allowing five runs on three hits and six walks with eight strikeouts in 5 1/3 innings for an 8.44 ERA and a 1.688 WHIP. His fortunes climbed this spring with the development of a slider.

"The improvement in the slider really gave me some confidence to be able to pitch again," Widener said. "At this level, you can't overpower everybody. You have to pitch. It makes a huge difference for me."