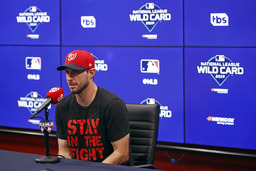 "I can't exactly say what he said to me," Martinez joked. "But he was excited. He's ready."

After a grueling 162-game schedule and a tight wild-card playoff race, it comes down to one game to determine the postseason future for Washington (93-69) and Milwaukee (89-73). The winner will advance to the National League Division Series to face the Los Angeles Dodgers, and the loser will go home to dwell on an abrupt ending to a once-promising season.

Neither side is prepared to back down with so much on the line.

"We're going into a hostile environment, playing against a hot team with one of the best pitchers in the league," Brewers left fielder Ryan Braun told reporters. "Certainly, it will be a challenge, but we've had our backs against the wall all month. We've been counted out many times. We kind of like being in that position."

Milwaukee ended the season with 18 wins in 23 games but fell just short capturing the NL Central division title after losing three straight games to the Colorado Rockies. Braun missed the final series because of a calf injury but is expected to play Tuesday.

Meanwhile, the Nationals topped 90 victories for the third time in four years but finished four games behind the Atlanta Braves in the NL East. Washington closed the regular season with an eight-game winning streak, outscoring opponents 54-24 during that span.

The teams met six times during the regular season, with the Brewers going 4-2 and outscoring the Nationals 42-38.

"Season's on the line, I've pitched in these situations before, and it's just crazy baseball," Scherzer said. "Intensity's out of your mind. And you've got to go out there and be your best and just compete as hard as you can."

In nine career games (eight starts) against Milwaukee, Scherzer is 2-2 with a 2.29 ERA. He allowed two runs (one earned) in six innings during his lone appearance against the Brewers this season on May 6.

Martinez said fellow starters Stephen Strasburg and Patrick Corbin would be available to pitch out of the bullpen if necessary.

The Brewers will turn to right-hander Brandon Woodruff (11-3, 3.62), who strung together four scoreless innings in two appearances in September after missing almost two months because of a left oblique injury. He is 2-0 with an 0.96 ERA in four career games (two starts) against the Nationals. In four playoff appearances (one start), he is 1-1 with a 1.46 ERA.

Woodruff is not fully stretched out and knows that he likely will give way to the Brewers' bullpen for the bulk of the game.

"It's that time of year where you just get out there and get after it," Woodruff told reporters. "It's going to be a team effort. Obviously, I probably won't be able to go six, seven innings, but I'll be ready to go as long as I can until they take me out."