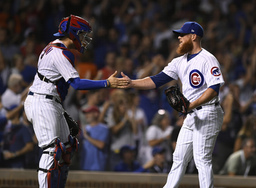 The Chicago Cubs will try to complete a three-game sweep of the visiting San Francisco Giants when the teams meet in the series finale Thursday afternoon at Wrigley Field.

Chicago is coming off victories of 5-3 and 12-11 in the first two games of the series and has won four in a row overall. The Cubs are looking for their first five-game winning streak since April 27-May 5, when the club won seven straight.

"I would like to think it is coming together," Cubs president of baseball operations Theo Epstein said to a group of reporters before Wednesday's game. "It is in our hands. We have a chance to go out there and play really well. You have to go out there and leave no room for doubt.

"We have to beat some really good teams."

Meanwhile, the Giants are looking to stop a three-game skid that has dropped their record to one game below .500.

San Francisco has scored double-digit runs in three of its past five contests, but pitching has proved to be problematic. The Giants have given up 38 runs over their past five games, an average of 7.6 runs per game.

Giants right-hander Jeff Samardzija (9-9, 3.54 ERA) will try to change the narrative against his former team. The Cubs drafted Samardzija in the fifth round of the 2006 draft out of Notre Dame, where he also played wide receiver for the football team. He made his debut in 2008 and appeared in 206 games (83 starts) for the Cubs over the course of six-plus seasons.

The Cubs will counter with right-hander Kyle Hendricks (8-9, 3.37), who is scheduled to make his 24th start. He is coming off a strong outing against the Pittsburgh Pirates in which he allowed one run on three hits in seven innings but came away with a no-decision.

Nicholas Castellanos is the Cubs' hottest hitter with home runs in each of his past three games. Kris Bryant also will look to stay hot at the plate after clubbing a two-run, go-ahead homer in Wednesday's victory.

Kevin Pillar has homered in two straight games for the Giants. Mike Yastrzemski has a five-game hitting streak and has 17 homers in 74 games.