Back in L.A., Cubs' Darvish seeks win vs. former team 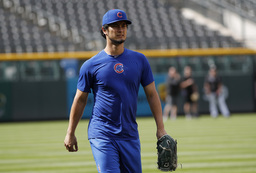 The last time Yu Darvish took the mound at Dodger Stadium, not only was the game decided shortly after it started, but the hopes of a championship faded as well.

Darvish will start for the Chicago Cubs on Saturday, facing a Los Angeles Dodgers team that he tried to help lead to a World Series title in 2017. In fact, Darvish got the ball to start Game 7 against the Houston Astros, but he gave up five runs (four earned) in 1 1/3 innings, and that was that.

The Astros won the World Series with a 5-1 victory that day. Darvish took the loss in two of Houston's four victories in the series, amassing a 21.60 ERA.

Still, the Dodgers reportedly were interested in bringing Darvish back on a free agent deal. The Cubs grabbed him instead with a six-year, $126 million contract. It has not gone well for the right-hander, as injuries have limited him to 22 starts with the Cubs in nearly a year and a half, and he owns just three victories and a 4.97 ERA.

Dodgers fans are not expected to have any sympathy Saturday, although Los Angeles manager Dave Roberts tried to be diplomatic, saying he expects the reaction to be "mixed."

"I thought he had some really good moments with us, and people want to rest on Game 7 a lot, which was unfortunate, for all of us," Roberts said Friday.

Even the Cubs fans in attendance are not expected to drown out the boos. They might not have the motivation due to Darvish's 2-3 record and 4.98 ERA over 14 starts this season.

He has not picked up a victory since April 27 against the Diamondbacks at Arizona, racking up eight consecutive no-decisions.

Darvish's issue of late is giving back runs just after the Cubs score. On Monday at Colorado, he allowed a pair of two-run homers in the bottom of the third to erase a 4-0 lead that his team built in the top of the inning. The Cubs lost 6-5.

"I don't know why," Darvish told reporters after the outing through an interpreter. "I have to find out. So next time we score, I will go 120 percent for that inning."

The Dodgers know how to pounce. They erased a deficit against the Cubs on Thursday with home runs by Cody Bellinger and Max Muncy in the fourth inning, and they erased two more deficits Friday, on home runs from Matt Beaty and Justin Turner. The Dodgers emerged with a pair of wins, 7-3 and then 5-3.

Los Angeles will counter on the mound Saturday with right-hander Walker Buehler (7-1, 3.35 ERA), who lost his own lead against the Cubs on April 24 at Chicago when Javier Baez hit a three-run home run in a six-run sixth inning.

Since then, Buehler has resembled the pitcher who burst upon the scene last year. Over his past eight starts, he is 5-1 with a 2.45 ERA. He has gone a combined 15 innings over his past two starts, giving up one run while winning both outings.

Against the Diamondbacks on June 3 in Phoenix, he had 11 strikeouts over 102 pitches. He had nine more K's over 91 pitches Sunday at San Francisco.

"The efficiency is the biggest thing for me," Buehler said, according to MLB.com. "I'm going to strike out guys in this league, and I've kind of shown that, but to get deeper in the games is obviously my goal. My only goal is to throw as many innings as possible."

Another goal might be better performances against the Cubs. He has faced them twice (one start) and is 0-1 with a 10.80 ERA against them.