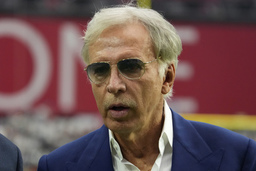 ST. LOUIS (AP) A plan to divide more than a half-billion dollars in settlement money for the departure of the NFL's Rams from St. Louis received final approval Wednesday.

The board of the St. Louis Regional Convention and Sports Authority, which owns the domed stadium where the Rams played before leaving for Los Angeles in 2016, approved an agreement announced Nov. 22.

St. Louis interests sued the league and Rams owner Stan Kroenke after NFL owners approved the team's move to Los Angeles in 2016. They sought more than $1 billion in damages.

A $790 million settlement was reached in November 2021. About $275 million went to attorney fees. That left $512 million, and interest brought the total to around $519 million.

The suit claimed the NFL violated its own relocation guidelines, and that the league and the Rams enriched themselves at the expense of the community they abandoned.