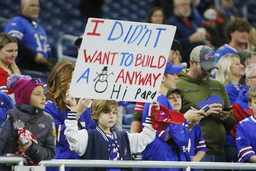 ORCHARD PARK, N.Y. (AP) A day before a major lake-effect storm buried western New York in snow, Bills quarterback Josh Allen acknowledged needing to place more faith in those around him to correct a sudden rash of turnovers.

Little could Allen have envisioned how much he and the Bills would need to lean on themselves and their snow-shoveling fanbase to overcome the challenges they'd face to dig themselves out, travel to play a "home" game in Detroit and - with little practice time - pull out a 31-23 victory over Cleveland to end a two-game skid.

"We could have easily folded and allowed it to be an excuse for us," Allen said. "But I trust in the guys that we have in this locker room that are true professionals that do things the right way."

With Buffalo still experiencing the aftereffects of a storm dumping 7 feet of snow in some places, the Bills (7-3) must do it all over again on a short week. After returning home Sunday night, they practice Tuesday before catching another 45-minute flight to Detroit to face the Lions (4-6) on Thursday, when they will be the visiting team.

What can't be overstated is how beating the Browns was no small feat for the Bills and the hearty residents of the place they call home.

"It's called 'the City of Good Neighbors' for a reason, and you saw that in full effect," coach Sean McDermott said. "Everyone back in Buffalo who's currently digging out again, we're thinking of you guys, and that was for you."

It began Saturday, when countless residents rallied to the Bills' aid to snow-blow driveways and clear trench-like paths in the snow just for players to make their flight to Detroit.

And the Bills paid them back by playing complementary football.

The defense contained one of the NFL's top running attacks to 80 yards, and it recovered a muffed snap, which led to Buffalo scoring on each of its next seven possessions.

On offense, Allen didn't have carry the load. He finished with 197 yards passing and 7 yards rushing, both season lows, while not committing a turnover for just the second time this year. The Bills' ground game instead found traction with Devin Singletary and rookie James Cook each gaining 86 yards rushing, season highs for both.

This marked a step forward for a team that faced numerous questions during a midseason skid punctuated by Buffalo blowing a 17-point lead in a 33-30 overtime loss to Minnesota a week earlier. Allen took the brunt of the blame because he committed three turnovers (two interceptions and a muffed snap recovered for a touchdown).

On Sunday, aside from crediting his teammates, Allen thanked neighbors - Paul "Squirrel" Winter and Mark Braun - for helping him get out of his driveway.

"They came with a big tractor and dug me out," Allen said, before noting the large turnout of fans in Detroit. "We really appreciate our fan base and can honestly say we couldn't have done it without them."

Winning at Ford Field. The Bills improved to 2-0 as the home team in Detroit. A similar massive storm, which hit on the exact same date in 2014, forced the Bills to relocate to Ford Field, where they beat the New York Jets 38-3.

Slow starts. The Bills scored a touchdown on their opening drive in four of their first five outings. In their past five, Buffalo's opening drives have ended with an interception, a lost fumble and three three-and-outs, including one against Cleveland.

Singletary. The player aptly nicknamed "Motor" shone in Motor City by averaging 4.8 yards per carry and scoring on a 5-yard run, his third TD in two games.

WR Gabe Davis. Mishandled Cade York's onside kick with 19 seconds remaining, only to be bailed out by teammate Taiwan Jones, who punched the loose ball out of bounds.

McDermott said DE A.J. Epenesa (ankle), who was hurt Sunday, and LB Tremaine Edmunds (groin), who did not play Sunday, "are going to be a stretch" to play Thursday.

21-4 - Allen's career record in games in which he doesn't commit a turnover. By comparison, he is 25-20, including 5-3 this season, in games with a giveaway.

It's back to Detroit where, for familiarity's sake, the Bills used the visitors' locker room, sideline and coaching booth against Cleveland.