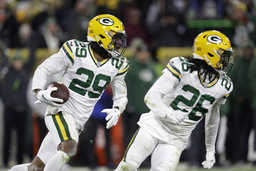 Now the Packers head into Thanksgiving week with virtually no margin for error as the three-time defending NFC North champions' playoff hopes continue to fade.

"Literally, it's win or go home at this point," cornerback Jaire Alexander said after the Packers' 27-17 loss to the Tennessee Titans on Thursday night. "So every game is a playoff game. Every game is the Super Bowl for us. So that's how we've got to attack it now."

Next up for the Packers is a trip to Philadelphia to face the NFC East-leading Eagles (9-1).

Green Bay's dispiriting performance halted the momentum the Packers established four days earlier when they rallied from a two-touchdown, fourth-quarter deficit to beat the Dallas Cowboys 31-28 in overtime. That snapped a five-game losing streak, the Packers' longest skid since 2008.

"Extremely disappointed right now to put on a performance like that," Packers coach Matt LaFleur said. "I don't even know what to say. It was nothing like a few days ago, and that's why you're only as good as your last game and every time you step out on that field, you've got to go out and do it."

Tennessee posted season highs in points and yards (408). The Titans even scored their first fourth-quarter touchdown of the year.

That's the same Tennessee offense that entered the night averaging a league-low 281.7 yards per game. The Packers talked boldly during the offseason about how they could have one of the NFL's best defenses, but they've struggled to stop teams when it matters.

Green Bay's greatest strength on that side of the ball had been a third-down defense that entered Thursday ranked third in the league. But the Packers couldn't get Tennessee's offense off the field. The Titans went 7 of 13 on third down.

"We had plenty of opportunities to get them off the field, and they got the third-and-ones and fourth-and-ones or whatever the case may be," defensive tackle Kenny Clark said. "So we've got to get them in negative situations and get them in third-and-long situations."

That was most apparent in the second quarter, when the Titans ran 27 plays to the Packers' six and outgained Green Bay 91 yards to 17.

Quay Walker stopped Derrick Henry for a 2-yard loss on fourth-and-1 from the 4 as an 18-play Tennessee drive ended without points. But the Titans forced a punt, got the ball back and pulled ahead for good on Henry's 4-yard run that made it 14-6 just before halftime.

That was the first of three straight touchdown drives for the Titans.

The lone bright spot for Green Bay was the continued emergence of rookie receiver Christian Watson, who caught two touchdown passes against Tennessee after scoring three times against the Cowboys. He's the first Packers rookie to have multiple touchdown receptions in consecutive games since Max McGee in 1954.

Watson's second touchdown cut the Titans' lead to 20-17 late in the third quarter.

But that's as close as the Packers would get. Green Bay totaled 8 yards on its next three drives as Rodgers couldn't recreate his magic from Sunday.

It now will take an even bigger comeback for the Packers to make it back to the playoffs.