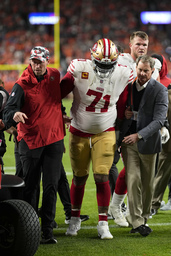 Colton McKivitz is undaunted by the big void he must fill on San Francisco's offensive line.

With All-Pro left tackle Trent Williams sidelined for at least a few weeks with a high ankle sprain, McKivitz will be thrown into the starting lineup on Monday night for the 49ers' showdown with the Los Angeles Rams.

"I mean, no one's going to be Trent Williams," McKivitz said Thursday. "Probably the best tackle to ever play the game. So I'm not going to try and do anything he does or go outside my game. At the end of the day it's football and the results are to get a win. That's my biggest thing."

This isn't the first time McKivitz has had to replace Williams in a key game against the Rams. He also had to start the Niners' crucial Week 18 game against Los Angeles last season that San Francisco needed to win to get into the playoffs.

McKivitz was far from perfect in that game but was solid enough for the Niners to have enough success offensively to win, helping McKivitz prove to himself, his teammates and coaches that he can play in the NFL after spending almost all his second season on the practice squad.

"It definitely helped my confidence," he said. "It could have been a lot different than if we had lost that game. To get a second chance and be able to build on that and have the confidence that they would throw me out there in that important of a game was huge for me. Then just building off of that has helped propel me to where I'm at today."

After starting three games as a fifth-round rookie in 2020, McKivitz admitted he didn't have the proper level of urgency in training camp last year. That led to him getting cut before the start of the season and his time on the practice squad.

But that performance against the Rams, when he was told at the last minute that Williams couldn't play, has helped him solidify a spot on the team.

"The game's not too big for him," coach Kyle Shanahan said. "I just remember when we told Colton he was up and it was no big deal to him and he went out there and he performed. It was a huge challenge going against those two edge players they had and he just battled all game. Whether he gets beat or not, he's going to be there every play and that always gives you a chance."

McKivitz said he's glad to have a little more notice this time around as he is spending the entire week working with the first-team offense knowing he will start Monday night.

McKivitz got extensive time at tackle with the starters in training camp this summer since Williams often was given time to rest and right tackle Mike McGlinchey was out with an injury.

But replacing Williams will take a strong performance by the entire line, especially against a defensive front led by Aaron Donald.

"We all have to step up and be aware," McGlinchey said. "You can't replace Trent. He's a one of one player. But we do have good young depth. Colton has had a great year. His camp was excellent."

The Niners are pleased Williams' absence will only be temporary after an initial scare that he had a more serious injury after the cart came out on the field Sunday night in Denver when Williams went down.

Shanahan said Williams won't need surgery and the Niners haven't decided whether to place him on injured reserve.

"I was fearing the worst," McGlinchey said. "As soon as he stood up and was talking, I was like that was a little premature and we'll get him back sometime this season versus the alternative."