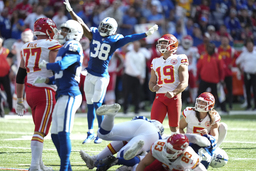 KANSAS CITY, Mo. (AP) The Kansas City Chiefs' stunning loss to the Indianapolis Colts was special in all the wrong ways.

There was the fumbled punt that led to a touchdown. The near-fumble that backed them up to their own goal line. The missed field goal and missed extra point. The head-scratching decision to try a fake field goal rather than put the ball in the hands of one of the league's best quarterbacks. And lousy kick returns that led to more poor field position.

To put it bluntly: The Chiefs' special teams were an abject disaster in their 20-17 loss on Sunday in Indianapolis.

"Listen, in the NFL the parity is crazy," Chiefs coach Andy Reid said, "so any mistakes get magnified, and that's just how it goes. So we have to clean that up. We have to clean it up. We'll get that taken care of."

It would help to get Harrison Butker, one of the league's best kickers, back from an ankle that he sprained on the shoddy turf in Arizona. The Chiefs have been forced to use fill-in Matt Ammendola the past two weeks, and while he was solid in a win over the Chargers, he showed Sunday exactly why he wasn't on a roster at the end of training camp.

His missed extra point kept Kansas City from tying the game late in the first quarter, and it may have played into Reid's decision to try a fake field goal on fourth-and-11 from the Colts 24 early in the fourth quarter. Tommy Townsend, the holder, wound up throwing an incomplete pass on a play that wouldn't have picked up the first down anyway.

Pressed on the decision, Reid replied: "I probably should not have done that."

Given what happened, maybe going for it on fourth down was a good idea - though perhaps with the ball in Patrick Mahomes' hands instead.

In any case, the Chiefs sent Ammendola back out with 8 1/2 minutes to go, but his 34-yard field-goal try was wide, keeping the game 17-13; those points would have forced overtime the way the game played out.

"Obviously we missed some kicks and stuff like that," Mahomes said, "but the end of the day we had multiple opportunities to score. We have to find ways to get the ball in the end zone, and that starts with me."

The Chiefs have to get Mahomes the ball first.

After their defense made a nice stand to start the game, rookie Skyy Moore fumbled the punt, and the Colts needed to go just 4 yards for a touchdown. He nearly whiffed on the next punt, too, which left the Chiefs with the ball nearly on their own goal line, and they promptly went three-and-out and gave it right back.

Sure, a personal foul penalty on defensive tackle Chris Jones on the drive on which the Colts scored the go-ahead touchdown in the waning minutes was critical. Yes, the offense squandered far too many opportunities.

More than anything else, though, it was special teams that truly let Kansas City down on Sunday.

The defense held Colts running back Jonathan Taylor to 21 carries for 71 yards, and it held Matt Ryan in check until their final drive. And even on that drive, the Chiefs had forced a punt when Jones - in a foolish mistake - was flagged for taunting Ryan, giving Indianapolis a fresh set of downs and ultimately leading to its go-ahead touchdown.

Obviously special teams need help. But so does the offense, which reached the end zone twice, but otherwise struggled to finish off drives.

Mahomes was held to 262 yards passing while throwing his first interception of the season, when Kansas City was trying frantically to get into position for a tying field goal in the final seconds.

JuJu Smith-Schuster had been relatively quiet through the first two weeks of the season, but the high-profile free-agent acquisition had his best game in a Chiefs uniform on Sunday. He caught five passes for 89 yards.

Jones only had two tackles and one tackle-for-loss in the game, and maybe his inability to get to the quarterback allowed his frustration to boil over. Whatever the reason, the personal foul penalty in the closing minutes was inexcusable.

The Chiefs came out of the game relatively unscathed. Now, they need to hope Butker's sore ankle is better by Sunday.

7 - If the Chiefs would have converted their two field goals, instead of missing one and trying a fake on the other, and made their missed PAT, that would have added up to seven points. And would have been enough to win the game.

The Chiefs hit the road for the third time in the first four weeks when they visit Tampa Bay on Sunday. The Buccaneers have hardly looked like the same dynamic outfit that routed Kansas City in the Super Bowl a couple of years ago, losing 14-12 to the Packers on Sunday in a game that often seemed as if nobody wanted to win.