Titans, Raiders mired at 0-2, eye each other for 1st victory 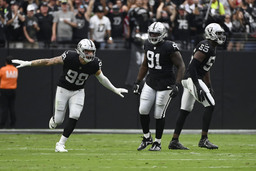 NASHVILLE, Tenn. (AP) The Tennessee Titans and Las Vegas Raiders are in an NFL group no team ever wants to be mired in: 0-2 and stuck at the bottom of their divisions.

If these teams can avoid a tie Sunday in Music City, at least someone will walk away with the first victory of the season and a chance to start building some momentum.

And the Titans and Raiders, both playoff teams in 2021, insist their issues right now are all their own.

"That's the message to our team," Titans Pro Bowl defensive tackle Jeffery Simmons said. "It's not about trying to see who's going to go 0-3. It's about the Tennessee Titans finding a way to get this win."

The Titans haven't started this poorly in a decade, and their 41-7 rout Monday night in Buffalo was their worst loss since October 2017.

It's been a distressing start for a team that was the AFC's No. 1 seed a year ago, though Tennessee at least plays in the woeful AFC South.

That made blowing a 20-point halftime lead in a 29-23 overtime loss to Arizona in the Raiders' home opener more than disappointing in the competitive AFC West. Adams, who had just two catches for his fewest receptions in a game since 2017 and nothing after halftime, said there's a bit of urgency.

"We have to be on our stuff and get ready and go out there and get a win now," Adams said.

Raiders defensive coordinator Patrick Graham doesn't have much affinity for offensive players, having spent his entire career devising ways to stop them. Graham does admit that Titans running back Derrick Henry is an exception with this his first chance at defending the two-time NFL rushing champ.

"I've admired from afar because as a defensive coach, there's not too many things we like about offense, but when you see a guy that could run the ball and the way he runs the ball and the physicality, I wish he would have switched over to defensive end or linebacker at some point," Graham said. "I'm excited about the challenge."

The Raiders have been stingy against the run so far, allowing just 3.7 yards per carry for the sixth-best mark in the league. Henry is off to a slow start with just 107 yards rushing the first two weeks.

The previous time the Titans played against Chandler Jones, the defensive end wreaked havoc on their offensive line, sacking Tannehill five times and forcing two fumbles to kick off his run to a fourth straight Pro Bowl and the three-year contract the Raiders gave him this offseason.

The Titans will be without three-time Pro Bowl left tackle Taylor Lewan, whom Jones repeatedly attacked a year ago. Lewan was carted off after their first offensive play against Buffalo. Dennis Daley replaced Lewan in Buffalo and now will have a week of practice.

Tannehill said he wants to keep all of the Raiders' big guys at arm's length, including Maxx Crosby.

"Those are guys who play fast, they are long, they are active, they play hard and they are disruptive," Tannehill said. "Definitely have to be aware of those guys and have a plan for them."

Adams had a big debut for the Raiders with 10 catches for 141 yards and a TD in Week 1 against the Chargers as the focal point of the offense. Then Adams had only seven passes thrown to him last week, leaving him upset only over the Raiders' lack of success, not the dip in passes.

"If I can't be a factor in the game and it does look bad, that's when I have frustration about my productivity," he said. "It's not about wanting to be All-Pro. I hold myself to that type of standard because it helps the team ultimately."

The Titans will be without Bud Dupree, leaving them without their two starting outside linebackers with Pro Bowler Harold Landry III on injured reserve with a torn ACL. Starting cornerback Kristian Fulton and reserve running back Dontrell Hilliard should return, though punt returner and receiver Kyle Philips (shoulder) is doubtful.

The Raiders have five starters on the injury report with center Andre James trying to clear the concussion protocol and safety Tre'von Moehrig dealing with an injured hip. Renfrow (concussion) and linebacker Denzel Perryman (ankle) both are out.