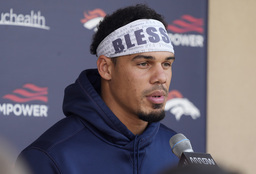 ENGLEWOOD, Colo. (AP) Justin Simmons' 66-game starting streak will end this weekend after the Denver Broncos' captain and star safety sustained a thigh injury in the season opener at Seattle.

Coach Nathaniel Hackett revealed the injury Wednesday, when Simmons was placed on injured reserve, sidelining him at least a month. The Broncos promoted cornerback Essang Bassey from their practice squad to take his roster spot.

Hackett said Simmons finished the game after getting hurt in the second half of Denver's 17-16 loss to the Seahawks on Monday night. He had nine tackles and his second career fumble recovery.

"He's a tough guy, so he stayed in there and rolled with it and finished the game," Hackett said.

Simmons has been a workhorse over his seven-year career in Denver. He played every snap from 2018-19 and hasn't missed a game since sitting out the final three weeks of the 2017 season with an ankle injury.

"He's a competitor," Hackett said. "He's one of those guys. I mean, he played the whole game with it. I got so much respect for him just as a person and as a player."

"It's hard to replace a guy like Justin Simmons, what he does for our defense, what he does in the locker room and for this team with his leadership," fellow starting safety Kareem Jackson said. "It's tough. I'm sure everybody in the community knows what type of guy he is on and off the field.

"But for us, we kind of pride ourselves on having the next guy available ready, and Caden Sterns played a ton of ball in this league in such a short time, and I think he's very ready for the situation and for the opportunity."

Sterns, a fifth-round pick out of Texas last year, played in 15 games his rookie season, including two starts, and he had a pair of sacks.

A day after Hackett said he should have gone for it on fourth-and-5 instead of opting for a 64-yard field goal try in the final seconds at Seattle, QB Russell Wilson said he, too, wishes he'd had the ball in his hands at that point.

"I mean, listen, I think, yeah," Wilson said. "I think that anytime you get the chance to try to win the game ... I always believe in having the ball. But, also, we got a great kicker and we're going to believe in our kicker again, so I always trust his decisions. But I'm also always ready to go try to do it."

Wilson has a 70% conversion rate in such fourth down situations over his career and only two out of 42 kickers in the history of the NFL have converted a field goal from the distance. The longest one ever made at Lumen Field was a 56-yarder eight years ago.

Asked if he'd speak up, given his resume, if that situation arises again, Wilson said, "I was at the line of scrimmage ready to go for it, too, and I was calling a play and we were ready to go. But that's what we decided and we went with it and we missed by a yard, maybe half a yard."

Hackett said the team has quickly moved on from their blunder-filled opener and Wilson said he broke down the huddle Wednesday by telling his teammates, "the thing about great teams is they always respond."

NOTES: The Broncos signed S Anthony Harris to their practice squad. Harris is an eighth-year pro who has played in 95 NFL games with 61 starts with the Vikings (2015-20) and Eagles (2021). ... Several others sat out practice, including OLB Randy Gregory (shoulder, knee), WR KJ Hamler (knee, hip), ILB Josey Jewell (calf), RG Quinn Meinerz (hamstring) and CB K'Waun Williams (wrist). Gregory and Hamler were held out as a precaution, and RT Billy Turner (knee) was a full participant at practice after being held out of the opener.