Hackett flops in his head coaching debut for Denver Broncos 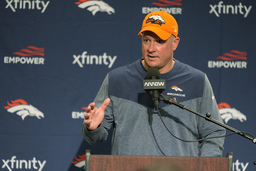 ENGLEWOOD, Colo. (AP) Nathaniel Hackett started out his news conference Tuesday admitting his error in attempting a 64-yard field goal instead of keeping the ball in Russell Wilson's hands in the closing seconds of the Denver Broncos' 17-16 loss to Seattle. Then, he waffled and ended up defending the dubious decision more than lamenting it.

"Looking back at it, we definitely should have gone for it," a haggard Hackett said after a day of taking flack across the country for his decision that turned his Denver debut into a dud and ruined Russell Wilson's shot at getting the last laugh at all the boobirds in Seattle.

"One of those things, you look back at it and say, `Of course we should go for it. We missed the field goal,'" Hackett said. "But in that situation we had a plan. We knew 46 was the mark."

Two of the things that landed Hackett his first NFL head coaching job were his innovative play-calling and his affection for analytics, neither of which were on display Monday night.

"I think numbers are an amazing thing in this world," Hackett said at his introductory news conference back in January, when he pledged to use data "to help us make great decisions."

Hackett, however, went against the percentages when the Broncos faced fourth-and-5 from the Seattle 46 and the clock ticking under a minute.

Instead of trusting his quarterback that cost the Broncos three players, five draft picks and a whopping $165 million in guaranteed salary, Hackett called on kicker Brandon McManus to do something he'd never done: kick a 64-yard field goal, the second-longest in NFL history.

"I was surprised that they took Russ out there," said Seahawks coach Pete Carroll, whose fractured relationship with Wilson led to the quarterback's stunning departure from Seattle six months ago.

Wilson was rendered a sideline spectator in the game's most crucial moment in his Denver debut even though in his career he's 22 of 29 with 20 first downs on fourth down and between 4 and 6 yards to go.

After narrowly missing wide left Monday night, McManus is now 1 of 8 on kicks of 60 yards or more, his only conversion a 61-yarder against the Chargers in the 2021 season finale.

Moreover, Seattle is one of the toughest places to kick. The longest field goal ever made at Lumen Field was a 56-yarder by Dan Bailey in 2014.

Asked if he was aware of that, Hackett said, "When we looked at it, it's about listening to the players, finding out where they are at and what they can do. That was something we all agreed on. The fact that it was fourth down and that was our one chance to decide that, that's why we did that."

Hackett added, "I wanted to give him that opportunity. I wanted to give him a chance to be able to win the game right there. He had the distance; it just went a little bit left. It's just one of those things that's unfortunate, but that was our plan going into it. '

Asked if Wilson campaigned to go for it on fourth down, Hackett said, "No, we all had the plan."

Percentages aside, Hackett lacked imagination on the two plays where his running backs fumbled at the goal line. He put Wilson in the shotgun, which eliminated the play-action option to freeze a linebacker and create a rushing lane.

Denver was disorganized all night, struggling to get set at the line, and that played a role in Javonte Williams' fumble into the end zone after Melvin Gordon had done the same thing.

Bradley Chubb overcame a slow start to record a pair of second-half sacks. Those were his first quarterback takedowns since Nov. 29, 2020, as he missed all but seven games last year after surgeries on both ankles.

Third-year WR Jerry Jeudy caught four passes for 102 yards and his 67-yard touchdown was the former first-rounder's first score since the season finale his rookie year.

Denver lost RG Quin Meinerz to a pulled hamstring in the first half and CB K'Waun Williams to a hand injury in the fourth quarter.

19-The number of carries by Williams (seven) and Gordon (12) to go with 42 passes from Wilson, who ran once for 2 yards.

The Broncos have a short week to correct their sloppy play and coaching blunders to prepare for the Houston Texans, who tied the Indianapolis Colts 20-20 Sunday.