Jaguars to play starters 'a couple series' against Browns 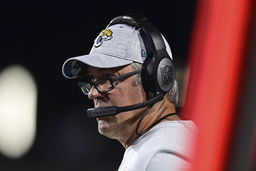 JACKSONVILLE, Fla. (AP) Doug Pederson will play his starters a little in Jacksonville's preseason game against Cleveland on Friday night.

"It's a new scheme, got new faces, new people out there that he's working with and a new center," Pederson said. "So just seeing all of it put together and just want to have some crisp plays, some good execution and try to score, try to score a few points and get them out."

Pederson expects starters to play "a couple series" against the Browns in Jacksonville.

The Jaguars held out most of their first-team guys in a 27-11 loss to Las Vegas last week in the Hall of Fame game in Canton, Ohio. Jacksonville didn't get on the scoreboard until late in the third quarter and didn't find the end zone until the waning minutes. The defense, meanwhile, allowed 159 yards and three touchdowns rushing.

"This week I'm going to let the starters play, you know get their feet wet a little bit in this football game with a couple series," Pederson said. "Nothing too crazy, nothing too long. But just want to get them the feel of the game and get them in there and get them working in game situations."

Pederson will hold out one starter - running back James Robinson (Achilles tendon) - as well as rotational receivers Jamal Agnew (hip) and Laviska Shenault (hamstring). Kirk also could sit out. The team's top free-agent signing sprained an ankle in practice Monday and was working on the side Wednesday.

Second-year running back Travis Etienne, who missed his rookie year after suffering a foot injury last August in the preseason, will play his first game since then.

"We've seen a lot here in practice, but you now get under the lights and the crowd and all that kind of stuff," Pederson said. "It's a different feel and that's why you do it, right, why you kind of practice for all those scenarios. He's one of the guys we want to see."

Notes: LB Devin Lloyd (hamstring), a first-round draft pick from Utah, won't play. Pederson expects him to return next week. ... RTs Jawaan Taylor and Walker Little will alternate reps with the first-team offense against the Browns. It's one of the team's few starting jobs up for grabs in camp. ... Reserve LT Badara Traore and DE Jeremiah Ledbetter will be miss some time, Pederson said.