NFL's preseason Hall of Fame game delayed due to weather 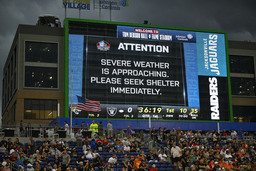 CANTON, Ohio (AP) The start of the Hall of Fame game between the Jacksonville Jaguars and the Las Vegas Raiders on Thursday night was delayed due to severe weather in the area.

Fans were told to seek shelter when storms moved through the area ahead of the start of the NFL preseason opener at Tom Benson Hall of Fame Stadium. The game, originally scheduled to start at approximately 8 p.m., began after a 40-minute delay.