Alexander gives Jets D 'Coke with a little something in it' 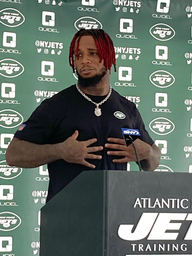 "It felt legendary, man," the veteran linebacker said with a smile Monday.

And it was certainly a solid first impression for Alexander, who had his coaches raving about him.

"He's awesome," defensive coordinator Jeff Ulbrich gushed. "He's got this infectious energy about himself, he's got an edge to him. He's got the ability to elevate people around him.

Ulbrich was then asked if the Jets were lacking the type of hard-nosed approach Alexander provides on defense. He found a creative way to describe the signing last Friday of the tenacious and ultra-competitive linebacker, using a beverage comparison that drew some laughs.

"I don't know if it was necessarily missing, but it's always good to add that," Ulbrich said. "The more guys that you have like that, the better. I always say, like, Coke is really good, you know? But Coke with a little something in it is even better, right? You know what I'm saying?"

In other words, Alexander adds a little twist to the defense. And being on the field again was a refreshing feeling.

"To be back under my feet, to be out there with the team," Alexander said, "I enjoyed it."

In the Jets' first padded practice of training camp, it was, well, the wrath of Kwon as Alexander made his presence felt - and heard. He slammed into Ty Johnson to stop the running back at the goal line on one play. Alexander later stood up rookie running back Zonovan Knight to set off some big cheers from the defense.

"He did what Kwon does and made sure that the other side of the ball knew about it," coach Robert Saleh said. "He brought everybody to life."

That came after Saleh wasn't expecting Alexander to be in practice-ready shape - physically and mentally - so soon after being signed. Newly signed players normally have a longer acclimation period.

"They were wondering, was I going to be ready, and I did all the drills and stuff," a smiling Alexander said. "I told them to ramp it up a little bit more. I was ready to go."

Alexander spent last season and part of 2020 with New Orleans after 1 1/2 years in San Francisco with Saleh as his defensive coordinator. A fourth-round pick by Tampa Bay out of LSU in 2015, Alexander made a Pro Bowl in the third of his four seasons with the Buccaneers.

With the Jets, he comes to a familiar defensive scheme and his ability to play different spots at linebacker made him an attractive target for New York. Alexander, who also spoke to the Saints and Giants, remained an unsigned free agent until last week despite his playmaking ability and reputation as a leader. But he isn't necessarily using that as added motivation.

"I've got a chip on my shoulder every time I come out there on the field," he said. "I try to be the best I can be. For me, I've just got to get going. Once I get going, it's going to be hard to stop me. That's what I'm ready to do."

And the Jets - and plenty of their fans - will surely drink to that.

"Everybody brought me here with open arms," Alexander said, "and I love them for that."

NOTES: RB Tevin Coleman (non-COVID illness) did some running on the side during practice and Saleh said "he's close" to being activated from the non-football injury list. "We should get him back this week," Saleh said. "Hopefully sooner than later." ... LT George Fant is still being held out of team drills as he continues his comeback from offseason arthroscopic knee surgery.