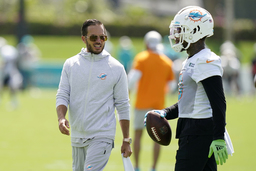 MIAMI GARDENS, Fla. (AP) Having fans at training camp is not an annoyance to Miami Dolphins coach Mike McDaniel.

It's part of his story, a tale that involves how a lost hat led to him coaching in front of Dolphins fans for the first time Saturday at training camp.

The year was 1993, and the Denver Broncos were holding training camp in Greeley, Colorado. McDaniel was 10 years old, Greeley was home at the time and he was obsessed with the Broncos.

One day while jostling for an autograph from a player named Robert Delpino, McDaniel's Charlotte Hornets hat got knocked away, never to be found again.

Broncos video coordinator Gary McCune went to a nearby mall and purchased a new hat to bring to the highly distraught boy the next day. McCune met McDaniel's mother. They got married, a heartwarming story that made headlines in Denver.

McDaniel's obsession with football only kept growing. He eventually became a Broncos ballboy. The rest, as they say, is history.

"I love having fans at practice," McDaniel said. "It's kind of true to my heart. Because that's literally full circle. Training camp practice in Greeley, Colorado, for the Denver Broncos is where this whole thing for me started. There is a connection that I think you can have with the fans."

Like all teams, the Dolphins will make a handful of practices open to fans during training camp. In the super-secretive world of the NFL, prying eyes are rarely a good thing, which is why teams err on the side of caution on public days and tend to keep things relatively basic.

"For all opponents watching, nothing that you see today will ever run again," McDaniel said. "It is a challenge. You have to think about it. And you just have to be very mindful of it. Listen, people are going to have an idea of what you are and how you play. And a lot of people do similar things in the National Football League with regard to scheme. But if there's certain things that you have lined up for certain opponents, you have to plan around that.

"The good thing is when you're not going to be able to control what gets out into the interwebs. So, you do adjust, to a degree."

That said, the Dolphins were happy to put on a show.

They might be about a half-century removed from their last championship - plans were unveiled Saturday for the anniversary celebration of the 1972 perfect season - but the support never seems to be lacking. Season tickets will sell out for the first time in team history in the next few days, and the Dolphins will soon have their first-ever waiting list for tickets.

McDaniel has made sure players are aware of the support, noting that they shouldn't feel entitled to have it automatically.

"Our fans always just come with the energy, no matter what we're doing on the field," linebacker Jerome Baker said. "I always appreciate that the fans, the community and the organization, they're all just behind us as a whole."

The Dolphins did their part to feed into the energy for the first open session Saturday. When the team emerged from the indoor facility and came out for stretching, they greeted by a standing ovation from fans who started arriving more than 2 hours earlier for seats in the bleachers. It didn't take long for wide receiver Tyreek Hill to rile the fans up with a backflip and a short speech.

"Get your popcorn ready," Hill said.

Offensive lineman Blaise Andries then smashed a couple cans of beverages into his head, and practice was off and running. Fans cheered stretching, cheered Tua Tagovailoa completing short passes, completing 30-yard passes. They cheered just about anything.

"It's a competitive advantage," McDaniel said. "It's kind of why you do what you do. ... It's just another reason for us to go about our daily process with a fine-tooth comb, to make sure that we pay them back for their investment in us."

And maybe there was a 10-year-old kid in the stands who, 29 years from now, will be coaching in the NFL.

"That's why I didn't allow any ambitious children to practice," McDaniel said.