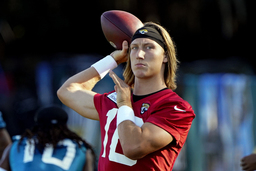 JACKSONVILLE, Fla. (AP) Trevor Lawrence's first team-building excursion was relatively inexpensive and somewhat bold for a rookie quarterback who hadn't even been named Jacksonville's starter - inviting a few receivers to Clemson for workouts, nightlife and a boat trip.

His encore wasn't nearly as simple.

An unquestioned starter, a team captain and widely viewed as the Jaguars' franchise savior, Lawrence picked up the hotel tab for his receiving corps in the Bahamas earlier this month. Football topped the agenda, just ahead of food, drinks, sun, sand and casinos.

"It was great," Lawrence said. "We had 10 or 12 guys out there. Obviously the field work is great, and that's important. But I think bonding, getting to know each other, hanging out, building that camaraderie before you start the season is really important.

"We've got a lot of new faces and a lot of old faces too from last year, but just gel everybody together."

The Jaguars are counting on Lawrence taking a similar leap on the field this season. He struggled at times in 2021, finishing with 12 touchdown passes and 17 interceptions while going 3-14 as a starter. He fumbled nine times, was plagued by drops (33) and hampered by sacks (32), steady pressure and a porous defense that had him playing from behind early and often.

But he seemingly turned a corner in the season finale, a few weeks after Urban Meyer was fired to end a tumultuous coaching tenure. Lawrence threw for 223 yards, with two touchdowns and no turnovers in a 26-11 victory that prevented AFC South rival Indianapolis from making the playoffs.

"We've got a good enough team to win as many games as we want to," Lawrence said.

That's a high bar for a franchise that's dropped 29 of its last 33 games and landed the No. 1 pick in the last two NFL drafts. But Pederson and general manager Trent Baalke spent more than $250 million in free agency in hopes of giving Lawrence a better chance.

"Really, the biggest thing is consistent improvement," Taylor said. "Every single day, we want him to get better. . For us, he's taking the coaching to the field and he's getting better."

Pederson said he wants Lawrence to "know where all the bones are buried" - What's the intent of the play? What's the expected coverage? What's the reaction to every scenario the defense delivers?

"The fact that he played the entire season (as a rookie), we can build off that and really expect a sky's-the-limit mentality with him," Pederson said. "He's in the same frame of mind as well. He wants to take that next step, not only in his growth but leading this football team."

A big step came in the Bahamas.