Chargers hoping Spiller can provide depth at running back 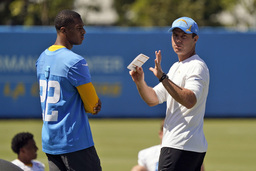 COSTA MESA, Calif. (AP) The Los Angeles Chargers are set with Austin Ekeler as their lead running back. Finding a dependable backup has been a work in progress the last two seasons.

With recent draft picks Joshua Kelley and Larry Rountree struggling to adjust to the NFL, and Justin Jackson a free agent, the Chargers are hoping fourth-round selection Isaiah Spiller can come in and provide a boost.

Spiller was on the practice field Friday for the start of rookie minicamp. Most of his time was spent in individual drills with running backs coach Derrick Foster.

"It was good. He's teaching me the footwork and a lot of the other things that I need to work on. I'm just ready to learn and get better," Spiller said.

Spiller was a three-year starter at Texas A&M, and an All-SEC first team selection in 2020. He gained 2,966 rushing yards during his college career, seventh in school history, along with 25 rushing touchdowns. He also had 16 100-yard games.

The 6-foot-3, 217-pound Spiller is considered an every-down running back. He has the frame to run between the tackles, but also has the right amount of speed to be elusive in the open.

Another thing that should help Spiller is he played in a pro-style offense under coach Jimbo Fisher.

"He's a very complete runner. I think that playing in Jimbo Fisher's offense, that offense really requires a lot of you. It's a very easy transition," coach Brandon Staley said of Spiller. "Just felt like he was a really productive player coming from an elite program. You're really seeing him have to navigate some NFL-type runs against NFL-type fronts, being in the SEC West."

Spiller also has good hands out of the backfield and the size and physicality to be effective in pass protection, two important keys for a running back in the Chargers' offense.

Spiller said after Friday's practice there were some similarities in the terminology between Texas A&M and the Chargers, which should help him pick up things faster.

When it comes to Spiller's role, a lot will depend on his progress along with if Kelley and Rountree have made any gains. Kelley was inactive for six games and Rountree wasn't in for four due to their struggles on special teams.

Kelley is also considered more of a shifty back, while Rountree's forte is short yardage.

"I feel like I can do it all. I can run inside and outside, between the tackles. I can make you miss, run you over. I feel like I really can do anything, and I'm ready to show that," Spiller said.