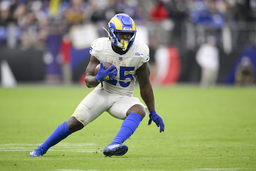 MIAMI GARDENS, Fla. (AP) The Miami Dolphins signed running back Sony Michel to a one-year contract on Tuesday, bringing a South Florida native back to his home area.

Michel has been part of two Super Bowl-winning teams in his four NFL seasons, after helping New England win a title in the 2018 season and the Los Angeles Rams win the crown last season.

He has rushed for 3,137 yards on 743 carries over his career, spending the first three of those seasons with the Patriots.

Michel's deal will pay him $2.1 million this season.