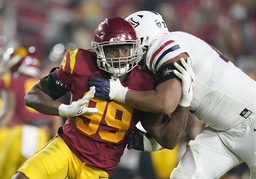 SANTA CLARA, Calif. (AP) The San Francisco 49ers went into the NFL draft with only a few obvious positions of need they could potentially target.

While San Francisco found some options at cornerback and guard, the Niners leave the draft still with some potential questions at center and safety.

The Niners took a pair of college tackles who they believe will best fit as guards in the NFL, and chose two cornerbacks on the final day of the draft Saturday.

Those picks came a day after San Francisco added more depth at edge rusher with USC's Drake Jackson in the second round and potential playmakers in LSU running back Tyrion Davis-Price and SMU receiver Danny Gray in the third round.

"We went into this draft and we were down in numbers at corner and O-line," coach Kyle Shanahan said Saturday. "It was nice to add two of those at each position and then you try to take the best player available. You got needs, which you always want to address, but you never want to over-address. If the the right player with your needs goes there, then it makes a lot of sense."

San Francisco took UTSA's Spencer Burford with its first pick of the day at No. 134. Buford began his college career as a guard before moving to tackle, but the Niners envision him starting off on the interior as a pro.

They added another college tackle they hope to move to guard with their first of three picks in the sixth round: Fordham's Nick Zakelj with the 187th pick.

The Niners lost starting left guard Laken Tomlinson in free agency and also were hoping to upgrade from Daniel Brunskill at right guard this offseason. Now they have a couple more options to compete with Brunskill and second-year players Aaron Banks and Jaylon Moore for starting spots.

Toledo cornerback Samuel Womack was taken in the fifth round and will be thrown into the mix at slot cornerback after playing mostly on the outside in college.

Penn State's Tariq Castro-Fields was taken in the sixth round and adds competition on the outside.

But the biggest remaining holes on the roster could be at center and safety.

The Niners are waiting for word whether 36-year-old center Alex Mack will return this season. San Francisco has journeyman Jake Brendel as a potential option or could move Brunskill over from guard, but would prefer to have Mack return.

"We're keeping our fingers crossed on Mack but we can't count on it," Shanahan said.

San Francisco also needs to replace strong safety Jaquiski Tartt, who is a free agent and hasn't signed with any team. Talanoa Hufanga, a fifth-round pick last year, is an option there along with free agent addition George Odum and Tarvarius Moore, who missed last season with a torn Achilles tendon.

GM John Lynch said he sees Davis as an eventual replacement at nose tackle for D.J. Jones, who left in free agency this offseason. Davis played only five games last year because of a torn ACL. Lynch said the 49ers won't rush him back and that Davis could start the season on the physically unable to perform list.

The cloud over San Francisco's draft was the status of All-Pro receiver Deebo Samuel, who requested a trade before the trade. The Niners didn't grant the wish when no team made an offer that was "remotely" close to how the team valued their best offensive playmaker.

Shanahan said he hasn't talked to Samuel for a few weeks but remains confident the sides will work things out before training camp.

"Hopefully when this is all said and done we'll get the best thing for the Niners, best thing for Deebo, and hopefully that's the same thing because we'd love to keep going how we've been," Shanahan said.

The Niners capped the draft by taking Iowa State quarterback Brock Purdy with the final pick at No. 262 overall. Purdy started 46 games at Iowa State, throwing for 12,170 yards and 81 TDs in college. He is also a threat as a runner with 1,177 yards rushing and 19 TDs.

Purdy will be honored with a week in Newport Beach as Mr. Irrelevant - the final pick of the draft.

Purdy said he was anxious from the fourth round until the end of the draft waiting to see where he'd end up.

"When my name got called at the end, I felt relieved in knowing where I was going to have to go," he said.

For the first time in six drafts with Shanahan and Lynch, the Niners didn't make a single trade during the draft. Despite making a few calls about moving up or back, San Francisco made all nine picks in their original slots.