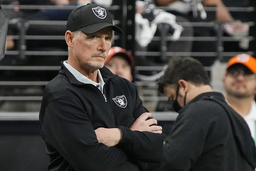 The Las Vegas Raiders have fired general manager Mike Mayock after three seasons and will begin a search for a coach and GM following their second playoff berth in the past 19 seasons.

The Raiders announced the move to get rid of Mayock on Monday, two days after losing their wild-card playoff game to Cincinnati 26-19.

"We thank Mike for his contributions over the last three years in helping to form the foundation for the franchise to build upon in its future," the team said in a statement.

The Raiders have already made a request to interview Patriots director of player personnel Dave Ziegler for the general manager job, as well as Patriots assistant Jerod Mayo for head coach, according to a person familiar with the request. The person spoke on condition of anonymity because the team didn't make the requests public.

Coach Jon Gruden brought Mayock in to replace Reggie McKenzie following the 2018 season, but the Raiders had spotty results in the draft and free agency in recent years.

Gruden resigned in October following the publication of his old offensive emails, and now Mayock is out as well, potentially giving owner Mark Davis a clean slate.

Interim coach Rich Bisaccia led the Raiders (10-8) to the playoffs with four straight wins to end the regular season, but his status going forward remains unknown. He has met with Davis and the Raiders must conduct a full search before deciding on a new coach to satisfy the Rooney Rule.

Mayock joined the Raiders after a long tenure as a draft analyst at NFL Network. While Gruden had final say on all personnel matters, Mayock held the title of general manager and had input on the draft in which the Raiders failed to hit on several first-round picks in his tenure.

The Raiders had three first-round picks in his first draft after trading away stars Khalil Mack and Amari Cooper. Those picks failed to transform the franchise with No. 4 overall pick Clelin Ferrell becoming a reserve this season, No. 24 pick Josh Jacobs becoming a solid running back and No. 27 pick Johnathan Abram being a liability in coverage at safety.

The team did hit on two later-round picks that draft with fourth-round edge rusher Maxx Crosby emerging as a star this year when he was a second-team All-Pro, and fifth-round slot receiver Hunter Renfrow having 103 catches for 1,038 yards.

But the 2020 draft may end up being what doomed Mayock. The team has already cut both first-round picks with receiver Henry Ruggs III getting released after being charged with felonies in a fatal DUI crash that killed a 23-year-old woman, and cornerback Damon Arnette getting released after making online threats to someone.

Two of the team's third-round picks -- Lynn Bowden Jr. and Tanner Muse -- never played a snap and none of the picks made a big impact.

The Raiders once again drafted a player higher in the first round than the consensus in 2021, taking tackle Alex Leatherwood 17th overall. He flamed out quickly at tackle and then moved to guard, where he also struggled with penalties and pass protection.

Now it will be up to a new general manager to make the key decisions on the future of quarterback Derek Carr and how to upgrade the roster to make the Raiders a perennial playoff contender.