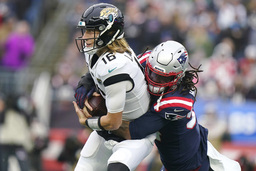 Dugger was sidelined by a hand injury and Hightower a knee injury in a 33-24 loss at Miami last weekend.

Also active is defensive lineman Christian Barmore, who practiced on a limited basis this week after being carted off the field last weekend with a knee injury.

Running back Damien Harris is active after being listed as questionable with a hamstring injury. Harris has combined for 214 yards rushing and four touchdowns in two games against the AFC East rival Bills this season.

The Patriots are without starting left tackle Isaiah Wynn, who had already been ruled out with hip and ankle injuries.

The Bills, by comparison, are injury-free with defensive end Efe Obada the most significant among the team's inactive players.