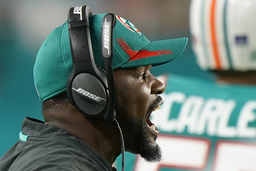 MIAMI GARDENS, Fla. (AP) Back-to-back winning seasons were not enough for Brian Flores to keep his job as coach of the Miami Dolphins.

The Dolphins fired Flores on Monday, a somewhat surprising move that came less than 24 hours after the team finished a 9-8 season. Flores went 24-25 while failing to make the playoffs in his three seasons in Miami, but finishing this year with eight wins in the final nine games.

The primary issues that Dolphins owner Stephen Ross cited for the decision seemed to have little to do with the on-field product and more with communication within the team's braintrust - though there were no specific examples offered of how the team determined Flores wasn't the right fit in those regards.

"I've been looking at this over three years now and watching the organization grow," Ross said. "I think an organization can only function if it's collaborative and it works well together, and I don't think we were really working well as an organization ... to win consistently at the NFL level."

It wasn't a total housecleaning: General manager Chris Grier is being retained. Grier has been with the Dolphins for 22 years, the last six seasons as GM and the last three of those overseeing all football operations.

Ross spoke highly of the work done to the roster over those three years.

"If you look at our roster, we have a very fine, I think excellent, roster of young players," Ross said. "This was all done in the last three years. We had an old, aging roster before it that was leading us nowhere but to mediocrity. And I think if you look at our roster today, you see our salary cap, the players we have, I think we're well-suited for the future."

It was already shaping up to be an offseason where the Dolphins would go through what has almost become an annual tradition of sorts, that being the process where they determine if their current starting quarterback should be their starter for the future.

And that dance - to stay with Tua Tagovailoa or not - will surely still happen.

The Dolphins considered trading for embattled Houston quarterback Deshaun Watson this past fall and may do so again; Grier, in his last remarks to media in early November, said if someone viewed "as being one of the top players around the league" comes available "at any position, you look at it and try and go for it."

"It'll be up to the head coach in terms of what he does with the quarterback," Ross said. "As I've said before, I have a lot of confidence in Tua."

Ross is a Michigan graduate and the largest donor in that university's history, and the Dolphins could look at Wolverines coach Jim Harbaugh as one of the possible candidates to take over.

But Ross, professing his love for Harbaugh, tried to quell that possibility, saying he won't be the person who takes the coach away from Michigan.

"I have no coach in mind at this point," Ross said. "We're going to do a thorough review and interview process."

Flores was hired in February 2019 and immediately began overseeing a rebuild. Miami started 0-7 in his first season, 1-3 last season and 1-7 this season. His teams always found ways to get better as the season went along, going 20-8 in games played in November, December and January.

"The credit goes to the players, coaches," Flores said after Sunday's 33-24 win over New England, one that finished off the Dolphins' first sweep of the Patriots since 2000. "I am always going to feel like and wish I could have done more. And our guys did work hard, from the players and coaches, obviously our support staff. It's a special group. I'm happy, I'm proud to be a part of it."

The next morning, he wasn't a part of it anymore.

The next Miami coach will be the team's 11th since its most recent playoff victory on Dec. 30, 2000. Dave Wannstedt was the coach that day; the coaches that have followed, in order, were Jim Bates, Nick Saban, Cam Cameron, Tony Sparano, Todd Bowles, Joe Philbin, Dan Campbell, Adam Gase and Flores.

Miami went a combined 19-14 over the past two seasons. Only nine teams - Green Bay, Kansas City, Tampa Bay, Buffalo, the Los Angeles Rams, Pittsburgh, New Orleans and Indianapolis - were better in that span.

The Dolphins could have about $75 million in cap space this offseason, though a significant chunk of that would disappear if they acquired Watson. There are also big free agent decisions to make in-house, such as defensive end Emmanuel Ogbah, tight end Mike Gesicki and wide receiver Mack Hollins. A speedy wideout to stretch defenses will surely be sought; Miami tried this season with Will Fuller, who was paid $10 million and caught four passes before getting hurt.

Tagovailoa has started 21 games for the Dolphins. That's not a big sample size, except by Miami standards. Only three quarterbacks in the post-Dan Marino era - Ryan Tannehill (88), Jay Fiedler (58) and Chad Henne (31) - got more regular-season starts for Miami than Tagovailoa.

Miami's last playoff win was just over 21 years ago and counting. Of the 31 other NFL teams, 29 have at least one win in that span, with Detroit and Cincinnati (which has a chance to change that this coming week) being the exceptions. New England has a league-high 30 playoff wins since Miami's last postseason victory.

Other than finding a coach, other top priorities will be deciding whether to re-sign Gesicki and looking at the landscape to see how the offensive line and running game can be improved.