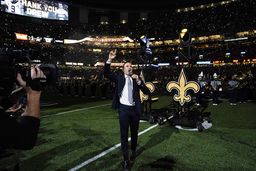 With Brees calling Thursday night's game between New Orleans and Buffalo as part of the NBC broadcast team, the franchise chose to honor Brees on the field at halftime.

"We've experienced so many unbelievable moments on this field and in this city.," Brees said. "Thank you so much for loving us, thank you for embracing me and my family. We will always love you and we will always work to make you proud."

Brees then raised his fist in the air while urging the crowd to belt out it's traditional chant of "Who dat, who dat, who dat say they gonna beat them Saints!"

"The greatest fans in the world, let's blow the top off this dome and make the world feel it and hear it," Brees said as he brought down his arm, initiating the chant.

The crowd then cheered as Brees walked off the field to go back to work.

Brees, who played 20 NFL season and his last 15 in New Orleans, played his final season before mostly sparse crowds as the NFL operated under COVID-19 protocols significantly restricting the size of gatherings in stadiums.

He retired last offseason as the NFL's all-time leader in yards passing with 80,358, but has since been eclipsed this season by Tampa Bay's Tom Brady.

Brees, who began his career with the then-San Diego Chargers in 2001, came in New Orleans at a time when the city was still coping with widespread devastation caused by Hurricane Katrina in August 2005. In his first season, the Saints - who'd gone 3-13 in 2005 - improved to 10-6 and advanced to the franchise's first NFC title game.

That was the first of nine season in which Brees led the Saints to the playoffs, with the team winning one Super Bowl and advancing three times to the NFC championship game.