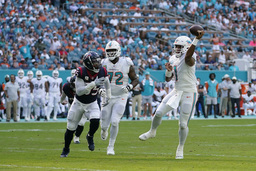 MIAMI GARDENS (AP) Tua Tagovailoa expressed mild concern this week about not wanting the Miami Dolphins' bye to interrupt the momentum they had built during a recent winning streak.

Some bye-week rust showed in Sunday's game against the Houston Texans with errant throws and drops, especially early. But Tagovailoa and the offense figured things out - quickly enough, in fact, for Tagovailoa to call it a day before the third quarter ended.

Tagovailoa threw for 299 yards and the Miami Dolphins raced to a 30-point lead before holding on for their fifth straight win, a 30-15 victory over the lowly Texans.

"We could have finished a lot of drives better ... but that's always tough when your team is hot and then you go into a bye week," Tagovailoa said. "You try to come back on a week like this to find whatever that feeling was that you guys had with that momentum."

Tagovailoa had his fourth straight game without an interception, Jaylen Waddle and Tyreek Hill each had 85 yards receiving and the Dolphins' defense had three takeaways in a game that was a 30-point blowout at halftime.

Tagovailoa finished 22-of-36 passing with a TD. He now has 11 touchdowns since returning from a concussion in Week 7. Skylar Thompson was 1 for 5 for 6 yards in relief for the Dolphins (8-3).

Houston (1-9-1) managed just 32 yards through its first 25 plays with Kyle Allen starting at quarterback in place of benched Davis Mills. The Texans finished with 210 yards of total offense, most of which came in the second half when they scored 15 straight points.

Dolphins coach Mike McDaniel didn't have an injury update on Armstead, who has been dealing with a toe issue all season. But McDaniel took the blame for the breakdowns in pass protection after Armstead's exit, adding that he got too aggressive in his play calling in the third quarter.

"It was something that I told the team after the game that I will learn from because it wasn't fair to them," McDaniel said. "When you do have some lineup changes, you can't put them in the positions they were put in. I don't think that was a fair representation of the group in general."

Houston running back Dare Ogunbowale had a 3-yard rushing TD in the third quarter for the Texans' first score, and tight end Jordan Akins had a 25-yard TD catch in the fourth quarter.

"On games like today when you're down 30 to zero at the half, you have to look at the positives," Houston coach Lovie Smith said. "We could have gone two different ways in the second half. I like the way we responded."

Miami scored on six of its first seven possessions, and its receivers were wide open in the Houston secondary. Five Dolphins players amassed 20 receiving yards. Waddle had 10 catches and Hill had nine.

In the first quarter, Waddle broke Miami's franchise record for the most receiving yards (1,926) in the first two seasons of a career. Jarvis Landry, now with New Orleans, previously held the mark.

Allen was 26-of-39 passing with 215 yards and two interceptions.

Standout rookie running back Dameon Pierce was held to 8 yards on five carries for Houston, a week after he had just 8 in a loss to the Commanders.

Waddle had a 22-yard catch on the opening drive to set up Miami's first score - a 45-yard Jason Sanders field goal - and Tagovailoa found tight end Durham Smythe in the end zone later in the quarter to give Miami a 10-0 lead.

Miami added four scores in the second quarter, including two off turnovers.

Linebacker Andrew Van Ginkel intercepted Allen deep in Texans territory and returned the ball to the 3-yard line. Running back Jeff Wilson punched it in. In the second quarter, cornerback Xavien Howard returned a fumble, which was forced by safety Eric Rowe, for a touchdown.

The Dolphins punted in the second quarter for the first time since their win against the Bears on Nov. 6. It was a rare occurrence in the first half Sunday, as Miami only punted once through its first six possessions.

Dolphins: Hill left the game with cramps. ... RT Austin Jackson, making his first start since suffering an ankle injury in Week 1, left in the second half with an ankle injury.