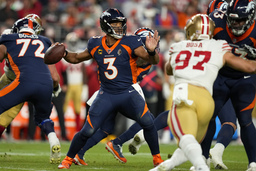 Russell Wilson and the Broncos (2-1) won despite going three-and-out nine times. Their only sustained drive was a 12-play, 80-yarder that included a 12-yard scramble by Wilson.

Gordon capped it with a 1-yard run with 4:10 remaining, but Wilson's 2-point pass was batted down, leaving the Broncos clinging to a one-point lead.

Jimmy Garoppolo, in his first start for the injured Trey Lance, who broke an ankle in Week 2, drove the 49ers (1-2) to midfield but his pass to Deebo Samuel was tipped by Jackson and intercepted by linebacker Jonas Griffith at the Denver 42 just before the 2-minute warning.

The Broncos went three-and-out again and the Niners got the ball back at their 15 with 1:42 remaining after punt returner Ray-Ray McCloud recovered his own muffed punt.

Bradley Chubb sacked Garoppolo for a 12-yard loss to the San Francisco 3. Then, Jeff Wilson hauled in the pass and coughed up the football on a hit from P.J. Locke. Jackson scooped up the loose ball with 65 seconds left at the 49ers' 24.

Before Gordon's score, Garoppolo's 3-yard strike to Brandon Aiyuk in the first quarter stood as the only touchdown on the night.

For a while it looked like this might be the first 7-5 finish since Washington beat Detroit on Oct. 16, 1938.

Garoppolo and the 49ers may never have been happier for a safety, because he stepped out of the back of the end zone while tossing a pass that Chubb picked off at the 3 and crossed the goal line for what the Broncos thought was a pick-6 that would have erased a 7-3 deficit.

But it was a safety, leaving the 49ers clinging to a 7-5 lead in the third quarter.

"Wish he wouldn't have stepped out on that one," Broncos coach Nathaniel Hackett said.

Garoppolo isn't the only NFL quarterback to lose track of where he was on the field and step out of the back of the end zone. It infamously happened to Dan Orlovsky on Oct. 12, 2008, while playing for the Detroit Lions. Orlovsky was trying to get away from Minnesota defensive end Jared Allen when he stepped out of bounds numerous times before the play was stopped.

San Francisco star left tackle Trent Williams injured an ankle on the play and walked off the field and through the tunnel to the locker room. He didn't return.

The Broncos drove into field goal range after the subsequent free kick, but Brandon McManus was wide right on a 53-yard attempt that would have given Denver its first lead.

Rosburg, who had been retired since 2019, was in the booth Sunday night and his hiring paid off immediately: Denver's operations were cleaner and he talked Hackett out of going for it on fourth-and-inches from his own 34 in the fourth quarter and punting it instead.

The Broncos buried the Niners deep and they got the ball right back and Wilson engineered the winning drive.

Jeff Wilson reeled off a 37-yard run up the middle that set up San Francisco's first touchdown, a 3-yard catch by Aiyuk.

The Broncos didn't get a first down until the final play of the first quarter on Russell Wilson's 34-yard pass to Courtland Sutton out of his own end zone.

That eventually resulted in a 55-yard field goal by McManus that cut Denver's deficit to 7-3.

Linebacker Josey Jewell made his 2022 debut after missing two games with a calf injury and he recovered a fumble by Garoppolo at the 50-yard line early in the third quarter. He also had one of Denver's four sacks and one of the Broncos' three takeaways.

"That was awesome to get back out there with the guys," said Jewell, who led Denver with nine tackles, including two for a loss.

The 49ers host the Rams on Monday night, Oct. 3, and the Broncos visit the Raiders on Sunday.