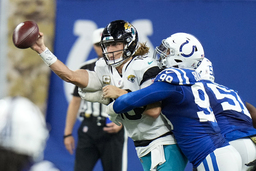 INDIANAPOLIS (AP) Jonathan Taylor's gashing runs and a blocked punt helped the Indianapolis Colts open with a flourish Sunday. Then their defense held tight for the final three quarters.

It was a winning combination.

Taylor ran for 116 yards and a touchdown, the Colts added another score on the block and they held on for a 23-17 win over Jacksonville to even their record for the first time this season.

"It's big, especially against a division opponent," quarterback Carson Wentz said. "It seems like we've been climbing out of this hole for a while now. It wasn't our best game, but a win's a win."

It wasn't easy, even against a foe with 12 straight road losses and nine straight defeats against division rivals.

But after starting the game with a 17-0 lead and again struggling to deliver the knockout punch, Indy (5-5) did just enough to close out its fourth win in five games. Kemoko Turay's fumble recovery with 50 seconds left ended Jacksonville's hopes.

Taylor pulled into a tie for the league rushing lead with two-time defending champ Derrick Henry (937 yards) and became the fourth player in the Super Bowl era to score a touchdown and produce 100 yards from scrimmage in seven straight games.

It was the blocked punt that really derailed the Jaguars (2-7).

Zaire Franklin burst through a gap in the middle of the Jacksonville line, got his hands up just in time and then E.J. Speed scooped up the bouncing ball and scored to make it 10-0. Taylor added a 4-yard touchdown on Indy's next series, and the Jags never fully recovered.

"It was a twist, and I just saw from those things you look at on the sideline, the pictures," Jags coach Urban Meyer said, referring to the tablets coaches and players use to examine in-game video. "It was a looper and we just made an error."

Jacksonville answered with a 66-yard scoring run from Jamal Agnew but missed the extra point. James Robinson added a 1-yard TD run early in the fourth quarter and when Trevor Lawrence connected with Dan Arnold on a 2-point conversion, the Jags were suddenly within 20-17.

The Colts' Michael Badgley extended the margin on a 37-yard field goal with 2:22 to play, leaving Lawrence with a chance to win it. Instead, the Colts got a strip-sack to close it out.

"I just have to take care of the ball," Lawrence said. "That just stings when you end the game that way. I'm disappointed with myself and frustrated."

Jaguars: Agnew has now caught a TD pass, run for a score and returned a kickoff and a missed field goal for TDs this season. He had three carries for 79 yards. ... Lawrence was 3 of 14 with 56 yards in the first half and wound up 16 of 35 with 162 yards. He has 13 turnovers this season. ... Robinson ran 12 times for 57 yards after missing last week's game with a bruised heel.

Colts: Wentz was 22 of 34 with 180 yards but was held without a TD pass for the first time in seven games. ... Indy is 9-0 when Taylor runs for 100 yards, and he's the fourth player in Colts history to reach 2,000 yards rushing in his first two seasons. ... Michael Pittman Jr. caught seven passes for 71 yards, but his streak of three straight games with a TD catch ended.

Wentz's wife, Madison, is due to give birth to the couple's second child in the next few days. But that didn't change their plans Sunday. Carson Wentz told reporters earlier this week that if she went to the hospital on game day he would join her - afterward - and Madison Wentz attended the game. Following the win, Carson Wentz said he had not yet heard from his wife.

"He just told me he'll see me on Wednesday," Reich said. "We'll pray for a safe and healthy delivery."

Jaguars: Linebacker Dakota Allen walked off early in the fourth quarter with an injured shoulder following a kickoff.

Colts: At Buffalo next Sunday. The Bills beat Indy in the playoffs last season.