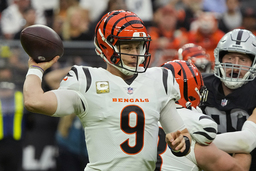 CINCINNATI (AP) - For the first time in years, the Cincinnati Bengals are positioned to make some noise in December.

The Bengals (7-4), with offensive playmakers and a defense that coalesced in back-to-back blowout wins, find themselves in the thick of a wide-open AFC playoff race.

Except for the 8-3 Baltimore Ravens, every AFC team has at least four losses, with 12 at .500 or better.

Cincinnati, playing four of its last six games at home, is confident.

"We haven't had that feeling in a long time here," Bengals safety Jessie Bates said. "I think we're ready for it."

The Los Angeles Chargers (6-5), who visit Cincinnati on Sunday, are in that playoff mix despite losing four of the past six games. Their 28-13 loss to the Denver Broncos was full of costly mistakes. They haven't managed to win two straight games since October.

Chargers quarterback Justin Herbert threw two touchdown passes last Sunday but also had two interceptions, one returned 70 yards for a touchdown and the other was in the end zone.

The inconsistency has been hard for the Chargers to explain.

"You'd like to have the same mindset going in regardless of whether we won or lost or whether you had a good game or a bad game," Chargers running back Austin Ekeler said.

"We are human, so we feel the emotions so we do our best to come in and have that consistent mindset that it's a new week, it's a new opponent."

The Bengals, looking for their first playoff appearance since 2015, are trying not to look ahead - too much.

"You know, we believe that we absolutely have the talent and the ability to end up playing deep into the postseason," Cincinnati offensive lineman Jonah Williams said.

"So that's our goal. It's hard to sit there and think about it because it can make you pat yourself on the back a little bit, and that's not something we want to do."

The Bengals, known more for their passing game behind second-year quarterback Joe Burrow, relied on another Joe - veteran running back Joe Mixon - for the spark in the past two games. Mixon had back-to-back 100-yard games for the first time since 2019, rolling for a career-high 165 and two touchdowns in the 41-10 rout of Pittsburgh last Sunday.

The Bengals have worked for the past couple of years rebuilding their defense, and the efforts are paying off. Defensive end Trey Hendrickson has 10 1/2 sacks and has forced three fumbles. Defensive end Sam Hubbard has seven sacks, and tackle Larry Ogunjobi has 3 1/2. The pass rush has created more opportunities for the secondary to make big plays. Cornerback Eli Apple has interceptions in the past two games, and cornerback Mike Hilton had a 24-yard, pick-6 against former teammate Ben Roethlisberger.

The Chargers already have 28 dropped passes, according to Sportradar, which is second in the league behind Miami's 29. Los Angeles is on pace for its most drops since 2009 and has already surpassed last year's total of 24.

Keenan Allen has four straight games with seven or more receptions, but he also has five drops. He was asked on Wednesday if the speed in which Herbert is throwing the ball is leading to drops.

"I have never been a fan of somebody saying that. You have to catch the ball," Allen said. "If he throws it too hard, go out there turn the JUGS machine up and get ready to catch the fastball. He's throwing the ball to you; you better catch it."

One reason why Brandon Staley was hired as Chargers coach was his ability to make the Los Angeles Rams the top-ranked defense in the league last year in his only season as coordinator. Trying to turn around the Chargers defense is proving much tougher. They come into Sunday's game last in the league against the run, 31st in third-down conversion rate and have allowed 24 points or more in seven straight games, which is the longest current streak in the league.

"We've really had to fight this year to figure it out on defense," Staley said.

Chargers: DT Linval Joseph was activated off the reserve/COVID-19 list and has also been dealing with a shoulder issue. ... LG Matt Feiler (ankle) missed last week's game at Denver, but is expected to return to the starting lineup this week. ... S Alohi Gilman (quadriceps) will miss his third straight game. ... CB Asante Samuel Jr. remains in the concussion protocol.