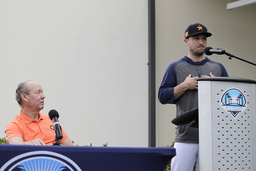 The player who’s the favorite to get hit the most according to these odds? Third baseman Alex Bregman, whose news conference apology last week was not well received.

The possibility of Houston’s hitters being intentionally hit this season has become a topic of discussion after pitchers around the league have either said or implied they would throw at them.

Los Angeles Dodgers pitcher Ross Stripling, who was on the team that lost to the Astros in the 2017 World Series, said he would “lean toward yes” when asked if he would consider throwing at Houston batters this season. Cleveland right-hander Mike Clevinger, who has been outspoken against the Astros since the cheating scandal emerged, said he doesn’t think “it’s going to be a comfortable few at-bats for a lot of those boys, and it shouldn’t be.”

Manfred said there will be no tolerance for such behavior.

"I hope that I made it extremely clear to them that retaliation in-game by throwing at a batter intentionally will not be tolerated, whether it's Houston or anybody else," Manfred said Sunday. “It's dangerous and it is not helpful to the current situation.”

But that hasn’t stopped speculation that the Astros will be targets of retaliation by upset players. The Astros were found by Manfred to have cheated during their run to the 2017 World Series and again in the 2018 season. The investigation found Houston used the video feed from a center field camera to see and decode the opposing catcher’s signs. Players banged on a trash can to signal to batters what was coming, believing it would improve the batter’s chances of getting a hit.

The offshore sports betting website https://www.SportsBetting.ag released a variety of prop bets related to the issue of Houston hitters being plunked this week. Behind Bregman, George Springer had the second-best odds of being the Astro to get hit this season. José Altuve, the 2017 American League MVP, and Carlos Correa also were listed as options to bet on for the Astro who finishes the season with most hit by pitches.

The over/under line for betting with 80 1/2 HBPs this season. MLB teams were hit an average of 66 times last season, with the New York Mets topping the list at 95.

Bettors can also wager on if the Astros will lead the majors in players hit by pitches this season and on the over/under on how many times an Astro will charge the mound this season, ostensibly after being hit by a pitch.

The website also has another bet related to Bregman, who finished second to Mike Trout in MVP voting last season. People can wager on if Bregman will be plunked over or under 10½ times in the regular season.

Houston manager Dusty Baker hopes Manfred’s warning will deter pitchers from hitting his players. But he knows it’s too soon to tell if Manfred’s words will make a difference.

“Whatever effect it has is not going to have effect until we get to the season,” he said. “So it is pure speculation to even talk about it. So, right now, our whole focus is just getting this team ready for the season.”