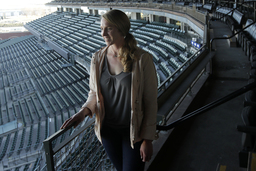 SAN FRANCISCO (AP) Gabe Kapler knew right away when he was hired as San Francisco's manager in November about the pressure he would feel taking over as leader of a franchise that has had so many good ones in recent memory. The skeptics were fierce, and he didn't deny that.

He is committed to earning people's trust, and has started by building deep relationships with the coaches and can carry that further with the players once everybody is together at spring training in Arizona. Kapler retained longtime Giants coach Ron Wotus to coach third base, lending some stability to the group by keeping someone who has been around for decades.

The 44-year-old Kapler - who previously worked with Giants president of baseball operations Farhan Zaidi with the Dodgers - follows a trio of popular veteran managers in Dusty Baker, who was hired last week to take over the Houston Astros, Felipe Alou and the retired Bruce Bochy.

It will be a big challenge since the Giants appear to still be in rebuilding mode. San Francisco went 77-85 in 2019, Bochy's final year. The Giants have missed the playoffs in each of the past three years since losing a four-game NL Division Series to the Cubs in 2016.

Kapler got the managing job right away following his firing by the Phillies on Oct. 10 after going 161-163 over two seasons. With slugger Bryce Harper their blockbuster acquisition, the Phillies finished 81-81 last year for their first non-losing season since 2012.

Drew Smyly could fit into the rotation as a key left-hander following the departure of former lefty ace Madison Bumgarner to the NL West-rival Arizona Diamondbacks. The bullpen has plenty of new faces, and right-handers Kevin Gausman and Tyson Ross are versatile enough to start or come out of the bullpen. Lefties Tyler Anderson and Jerry Blevins also have a chance to earn spots, though Anderson will be behind as he continues to work back from knee surgery.

The Giants made major league history when Alyssa Nakken became the first female coach on a major league staff, named an assistant coach under Kapler. A former standout softball player at Sacramento State from 2009-2012, Nakken joined the club in 2014 as an intern in baseball operations.

"The sense of responsibility is the biggest feeling," said the 29-year-old Nakken, who will be in uniform but not in the dugout during games. She will work in the cage to help players prepare.

Gold Glove shortstop Brandon Crawford is a reliable piece at the middle of the infield that the Giants build around each season. The rotation looks to have its leaders ready, even with Bumgarner's departure.

Also, will Johnny Cueto return at full strength after he came back in September to make four starts following a 13-month absence recovering from Tommy John surgery on his pitching elbow? He went 1-2 with a 5.06 ERA.

The questions in the outfield remain and those positions still could be determined during spring training, though the Giants are bringing back fan favorite and veteran Hunter Pence on a contract. A person with knowledge of the agreement said Friday that Pence was rejoining the Giants pending a physical.

Zaidi said Thursday he was still looking to add pieces to provide versatility around the diamond, and the Giants were working to finalize a deal with infielder Wilmer Flores.

Pablo Sandoval is back with a chance to make the team, something many probably didn't see coming last fall when he said an emotional goodbye along with Bochy, the third baseman's season cut short by a right elbow injury that required Tommy John surgery. A switch-hitter, his status will become clearer early in spring training following a physical by the medical staff but he has begun throwing and might be ready to get some game at-bats during the spring.

Zaidi expects it could be a month into the regular season before Sandoval is full-go.

The Giants open the season against rival Los Angeles on March 26 at Dodger Stadium.