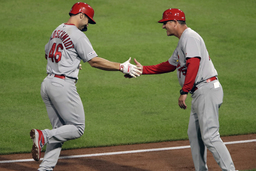 PITTSBURGH (AP) The St. Louis Cardinals spent the opening months of the season sputtering in tight situations. Now, they're soaring, keeping their chances in the wide-open NL Central afloat in the process.

Paul Goldschmidt hit his fifth career grand slam in the top of the 10th and right fielder Jose Martinez threw out the tying run at the plate in the bottom of the inning to help the Cardinals beat the reeling Pittsburgh Pirates 6-5 on Monday night.

Goldschmidt took an offering from Clay Holmes (1-1) and sent it to the concourse that runs behind the wall in right-center field with the bases loaded in the 10th as the streaking Cardinals moved to 8-3 since the All-Star break. Goldschmidt's 19th home run of the season was just enough after St. Louis reliever Carlos Martinez nearly let a four-run cushion get away.

"We've got to find a way to win the close ones," Goldschmidt said after his team improved to 14-15 in one-run games, including a 3-1 mark since July 12. "I felt like we haven't done that. There was a month or two in there, that's where the record was really bad. We weren't finding a way to win those close ones, whether it was a high-scoring game or a low-scoring one. Now, at least recently, we've won a few of these close games, come from behind. And that's what it's going to take. The division's so tight."

Pittsburgh drew within a run in the bottom of the 10th on an RBI single by Josh Bell and a two-run home run by Jung Ho Kang. The Pirates put the tying run at second base with no outs but couldn't pull even.

Martinez threw out Pittsburgh's Kevin Newman at home on a sharp single to right by Jacob Stallings for the second out. The call stood after the Pirates challenged and Carlos Martinez retired Adam Frazier on a fly ball to right to collect his ninth save.

"I just threw the ball as hard as possible," Jose Martinez said. "I was trying to make that throw low. We're still in the game. That's a tight ballgame."

Newman thought his left leg touched home before catcher Andrew Knizner got the tag down and threw his hands up in exasperation when home plate umpire Mike Eastbrook rang him up.

"Definitely a tough one to not go our way," Newman said.

Matt Wieters hit his eighth home run for the Cardinals - and fourth this month - and added a sacrifice fly. Chasen Shreve (1-0) picked up his victory since last August by escaping a two-on, two-out jam in the ninth.

Starling Marte had three hits for Pittsburgh. Bell, Colin Moran and Bryan Reynolds all drove in runs but the Pirates left 11 runners on base to fall to 2-8 since a 12-5 surge pulled them within 2 1/2 games of first in the NL Central at the break.

"I don't think we are doubting ourselves as a team," Pittsburgh starter Trevor Williams said. "I mean, shoot, that last inning was something special. Losses hurt but a loss like tonight is a tough one to swallow."

Williams looked crisper with a few extra days to prepare for his 14th start thanks to a bout with flu-like symptoms that forced the Pirates to skip his normal turn in the rotation over the weekend. Williams allowed two runs, one earned, in five innings with two walks and tied a season high with seven strikeouts in his most effective outing since returning from a month-long stay on the injured list in May and June due to a strained right side.

St. Louis rookie Daniel Ponce de Leon was roughed up by the Pirates last week, getting tagged for eight hits and four runs in less than four innings of work. The 27-year-old wasn't any sharper in the rematch. He labored through three innings while battling his command, allowing three hits and four walks while needing 86 pitches to record nine outs.

Cardinals: 3B Matt Carpenter (right foot contusion) is scheduled to begin a rehab assignment at Triple-A Memphis on Tuesday night. Carpenter is eligible to come off the 10-day injured list on Friday. ... Jedd Gyorko (right wrist surgery) is "doing baseball stuff" according to manager Mike Shildt and is slightly ahead of schedule but there remains no timetable for his return.

The Pirates activated reliever Keone Kela from the 60-day injured list then suspended him for two games for an unspecified violation of his contract. Kela went on the injured list on May 6 with right shoulder discomfort. He recently completed a rehab assignment with Triple-A Indianapolis, allowing five runs in 3 1/3 innings across four appearances with the Indians.

Pirates: Chris Archer (3-6, 5.36) will try to pick up his first win since June 6. Archer has a no-decision in each of his last six starts. He gave up three runs in six innings to St. Louis last Wednesday.