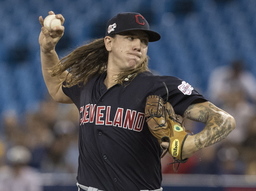 TORONTO (AP) Mike Clevinger dodged a scare on his first batter of the game to turn in another strong start for the surging Cleveland Indians.

Francisco Lindor drove in a pair of runs and Jason Kipnis had two hits and scored twice for the Indians, who are a major league-best 29-11 since June 4.

Clevinger (4-2) allowed three runs and five hits, matching his longest outing of the season. He walked two and struck out seven. The right-hander is 3-0 with a 1.88 ERA in four July starts.

Clevinger said he felt "exceptionally good" against the Blue Jays but acknowledged getting over-amped and trying to do too much at times.

"I was getting too excited where it's like, `This one might be a million miles an hour' and now I've pulled it and it's slower, and now it's a home run," he said. "That's what we've got to cut back on, just kind of stay with controlled intensity."

Two trips to the injured list limited Clevinger to four starts over the first three months of the season. He went 0-2 with a 17.05 ERA in two June starts separated by his second injured stint, but has been brilliant in July.

"After he came back from that injury, it took him about a start to get his legs under him, but he's been unbelievable ever since," Mercado said. "He's such a competitor. It's fun watching him pitch."

Clevinger got an unwelcome jolt in the first when Blue Jays leadoff batter Eric Sogard buzzed the Cleveland pitcher's head with a base hit.

"Too close for comfort," Clevinger said. "It was probably faster back at me than I threw it at him. I didn't react until after it was in center."

"I know it's a four-run lead, but we're trying to keep (reliever Brad) Hand out of the game," Francona said. "That went a long way to doing that."

Cleveland is 5-0 against Toronto this season.

Mercado hit an RBI triple off Justin Shafer in the sixth and led off the eighth with a homer against Sam Gaviglio, his eighth.

Making his first start of the season after being sidelined with a sore elbow, Blue Jays left-hander Ryan Borucki (0-1) allowed four runs, two earned, and seven hits in 4 2/3 innings. He walked four and struck out three.

"A little rusty, had a lot of adrenaline running, first day out," Borucki said. "Just something to build off of for my next start. A good starting point for me."

Cleveland opened the scoring in the second after a replay review showed Blue Jays shortstop Freddy Galvis had missed the bag on a force play at second base. Lindor made Toronto pay with a two-run single with two outs.

"We took advantage of it," Francona said. "Good teams do things like that."

Justin Smoak answered in the bottom half with a solo home run, his 16th, but the Indians got another two-out RBI in the third when Jose Ramirez doubled and scored on a base hit by Kipnis.

Cleveland's Roberto Perez hit an RBI double in the fifth but Toronto's Billy McKinney hit a two-run homer in the bottom half, his sixth, cutting the gap to 4-3.

The Indians wasted no time widening their lead again in the sixth. Mercardo's RBI triple skipped past a sliding McKinney in right, and Shafer left with a sore right elbow after loading the bases with back-to-back walks. Tim Mayza came on and gave up a sacrifice fly to Ramirez.

Shafer grimaced after throwing his final pitch and left the mound with a trainer following a brief chat with manager Charlie Montoyo.

Blue Jays: To open a roster spot for Borucki, the Blue Jays put RHP Trent Thornton (right elbow) on the 10-day injured list. Thornton first felt sore following a July 20 outing at Detroit. The rookie has an 11.08 ERA over his past four starts.

STARTING TO ADD UP

Borucki became the 15th pitcher to start for the Blue Jays this season, setting a team record. Toronto used 14 starters in each of the past two seasons.

KINGS OF THE ROAD