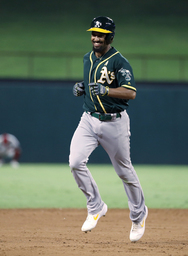 ARLINGTON, Texas (AP) Khris Davis will probably miss the hitter-friendly home of the Texas Rangers more than most.

The Oakland slugger might not quite be finished at Globe Life Park.

Davis homered twice, Ramon Laureano connected on the game's fourth three-run shot to break a tie in the sixth inning and the Athletics stayed in front in the AL wild-card race with a 14-9 victory over the Rangers on Friday night.

The 21st and 22nd long balls of the season for Davis put him within one of Jason Giambi's record 20 homers by an opposing player in a ballpark that's being replaced next year by a retractable-roof stadium across the street. The A's have two more games this weekend.

"I feel pretty confident just because the fans are almost cheering for me," said Davis, whose 32 homers against the Rangers are his most against any team. "They're giving me a hard time but I can hear them and they tell me to take it easy on them, so that gives me some confidence."

The A's (88-60) won their fourth straight, a streak that started with three victories in Houston following a 15-0 loss to the AL West-leading Astros.

Oakland remained a half-game ahead of Tampa Bay, which beat the Los Angeles Angels and has the second wild-card spot. Cleveland, rained out at home against Minnesota, is 1 1/2 games behind the A's.

Davis had one of the three-run homers, an opposite-field drive to right in the third after a solo shot into the Oakland bullpen in left-center in the second.

Laureano's 22nd homer well over the 14-foot fence down the line in left came against rookie reliever Ian Gibaut (1-1) after Texas manager Chris Woodward ordered an intentional walk of leadoff hitter Marcus Semien on a 3-0 count with an open base in a 7-7 game.

Texas matched a season high by allowing five homers, four of them with two outs, including both of the three-run shots. The A's scored 12 two-out runs.

"Probably some pitches we shouldn't have thrown to certain hitters in the middle of the plate, and they made us pay," Woodward said. "With two outs, 12 runs. I don't think I've seen that."

Both of the three-run shots from Texas put the Rangers ahead.

Shin-Soo Choo's opposite-field drive to left made it 4-3 in the second, and Danny Santana answered Davis' second homer with his 25th of the season into the home run porch in right for a 7-6 lead in the third. Choo tied a career high with his 22nd home run.

Laureano pulled Oakland even with a sacrifice fly in the fourth.

J.B. Weldenken (2-1) retired all nine hitters he faced in the fourth, fifth and sixth before A.J. Puk added two more perfect innings. Blake Treinen gave up a two-run single to Elvis Andrus in the ninth.

"J.B.'s been really good for us here," manager Bob Melvin said. "You look at his Triple-A numbers and they're not great. Then he comes here and seems to lock in."

Sean Murphy and Sheldon Neuse, the last two hitters in the Oakland order, reached four times each. Neuse, facing his hometown team, had four singles and drove in three runs, capped by a two-RBI hit in the ninth. Murphy had two doubles among three hits and scored four times.

Semien extended his career best with his 29th homer in the ninth, a two-run shot.

Texas reliever Shawn Kelley threw a ball over the netting and into the second deck of the stands behind home plate. The right-hander was just about to throw a pitch when home plate umpire granted Mark Canha's request for a timeout in the eighth inning.

Oakland starter Chris Bassitt gave up a season-high seven runs while matching his most earned runs at six in three innings, the right-hander's shortest outing of the season. Bassitt's ERA against division opponents rose to 6.02, compared to 2.70 against all other opponents.

Texas rookie Brock Burke, who had gone at least five innings in each of his first four career starts, allowed six runs in three innings. The 23-year-old left-hander surrendered three homers for the second straight outing after not allowing any in his first three.

A's: RHP Mike Fiers (14-4, 3.97 ERA) had a career-best 12-game winning streak stopped in his previous start, allowing nine runs in one inning in a 15-0 loss to Houston. The nine-year veteran is going for his first 15-win season.

Rangers: LHP Mike Minor (13-8, 3.08) goes for a career high in wins in what is set to become his third season with at least 30 starts. The 31-year-old had his major league-leading seventh outing of at least eight innings in his previous start, allowing two runs over eight innings in a 10-4 win over Baltimore.